It isn’t easy being an all-American hero in a new millennium.

The makers of “Captain America: The Winter Soldier” have added a new wrinkle to their blockbuster franchise, and it’s right there on their hero’s forehead. Steve Rogers, a.k.a. Captain America (Chris Evans), served his country as a WWII super-soldier in 2011’s “Captain America: The First Avenger,” then was frozen and thawed out in time for “The Avengers,” a tag-team superhero mash-up that was the box-office hit of 2012. A strapping, youthful 90-something now living in modern-day Washington, D.C., Rogers is used to fighting a Good War. Only our wars aren’t all that good anymore, and the doubt creasing Captain America’s handsome features is painful to see.

“Winter Soldier” delivers all the 3-D CGI mayhem audiences have come to expect from the Marvel entertainment juggernaut — you can run but you can’t hide from the company’s domination of pop culture — but there’s darkness and confusion just under its comic-book surface. Writers Christopher Markus and Stephen McFeely and co-directors Anthony and Joe Russo have taken a cue from the rival “Dark Knight” series and added a host of moral minefields for their hero to cross. The new film isn’t nearly as bleak as Christopher Nolan’s take on Batman (in general, Marvel seems more risk-averse when it comes to fiddling with the crown jewels), but it still creates an action-movie landscape torn between patriotic ideals and harsh post-9/11 realpolitik.

Early on, the Captain’s boss, S.H.I.E.L.D. head Nick Fury (Samuel L. Jackson), proudly displays his top-secret new defense system: a trio of massive airborne weapons stations, controlled by satellite, that can pinpoint and shoot down human targets anywhere on Earth. They’re drones on steroids, essentially. Fury’s proud of his new toy and so is Secretary Alexander Pierce (Robert Redford), head of the World Security Council. (Yes, you read that right: Mr. Indie Sundance Guy is holding down a major role in a studio blockbuster. Subverting from within? Or just trying to make sure the kids know who he is?) Rogers’s reaction is more muted: “This isn’t freedom. This is fear.”

There are other current anxieties dressed up in slick, rock-’em-sock-’em clothing. A ship in the Indian Ocean is taken hostage, but by French mercenaries rather than Somali pirates. The issue of whether S.H.I.E.L.D.’s surveillance intel — on everyone, everywhere — should be set free on the Internet is raised more than once. A possible cabal within our government plays to contemporary paranoias. And the psychological damage faced by returning veterans is grappled with by the Captain, his new friend (and VA therapy group leader) Sam Wilson (Anthony Mackie), and by the Winter Soldier of the title, a grimly unstoppable assassin who is Captain America’s bane and this movie’s Bane. 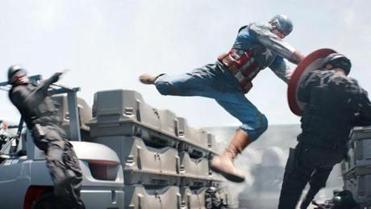 It all sounds like a heavy load to carry for a popcorn flick, yet “Captain America: The Winter Soldier” handles it almost too lightly. Without spoiling the plot, I can say that Sam has a superhero alter ego of his own and that  Scarlett Johansson handles her duties as fellow S.H.I.E.L.D. agent Black Widow with droll timing, a mean sidekick, and an unbecoming roll-on tan. Tellingly, this movie has no time for romance. Black Widow tries to set up the Captain on dates, but the cute nurse next door (Emily VanCamp) has other fish to fry and team member Maria Hill (Cobie Smulders) is all business. Maybe next movie.

“Winter Soldier” adds other semi-fresh elements to the Marvel mix. The foot chases are athletic exercises in parkour, the fistfights brutal ballets influenced by martial arts films (and shot, unfortunately, with frenzied editing and as many camera angles as possible; see the upcoming “The Raid 2” if you want it done right). Cars flip, soar, and burn, buildings collapse, and doomsday clocks tick down. Again. It feels like more ammunition is expended than in our last three wars combined. This is what the modern marketplace calls entertainment — take it or leave it — but while the thrills are there, I wouldn’t exactly call the movie fun. A kids’ film it’s not, and anyone who takes a child under, say, 9 or 10 is an idiot.

But, wait, isn’t Captain America supposed to appeal to children, and to the child in all of us? Isn’t he meant as a pop beacon of treasured democratic ideals? Maybe, but beacons don’t shine as far in today’s murk. Evans, a sly actor playing a stalwart hero, gets the expected laughs from Steve Rogers’s time-warped existence — the character keeps a list of all the pop culture items he missed out on while he was sleeping — but he wears the Captain’s dilemma with modest gravitas. A decent guy living in indecent times, Captain America has to choose when the moment is right for derring-do — and when it might be better to derring-don’t. Maybe he does represent the nation, after all.

Ty Burr can be reached at tburr@globe.com.
Loading comments...
Most Popular in arts
Real journalists. Real journalism. Subscribe to The Boston Globe today.