One of the very best films of 2014 opens in the Boston area Friday, and you almost didn’t get a chance to see it in a movie theater. Why that’s so is an absurdly complicated story — one that, on its surface, seems to be a struggle between a visionary director and a notoriously heavy-handed studio executive. Dig a little deeper, though, and the whole mess may say more about an invisible struggle in the movie industry about which audiences get to see what films when. War of wills or battle for our eyeballs — either way, the drama surrounding “Snowpiercer” is almost as gripping as the one on the screen.

Directed by the gifted Korean maverick Bong Joon-ho (“Mother,” “The Host”) — Quentin Tarantino recently compared him to Spielberg in his prime — “Snowpiercer” is a mesmerizing science fiction/action film that moves like the bullet train on which it takes place. Based on a French graphic novel and scripted by Bong and Kelly Masterson (“Before the Devil Knows You’re Dead”), the story unfolds 17 years after scientists’ attempts to control global warming have gone horribly wrong, plunging the planet into a killing deep freeze. The remnants of humanity have taken refuge on a high-speed train that circumnavigates the Earth once a year.

More allegory than Ark, the train arranges its cloistered society in ranks and stations, from one end to the other. At the front live the technocrats and wealthy 1 percenters. In the squalid cattle cars at the far rear reside the poor, subsisting on a diet of mysterious gelatin bars. (No, they’re not made of Soylent Green.) The time has come for revolt, and led by the scarred freedom fighter Curtis (Chris Evans — Captain America himself!) and his wizened mentor, Gilliam (John Hurt), the back-enders plow forward through the cars and up the economic rungs, fighting bloody pitched battles every step of the way. The rebels’ end game is the engine car, controlled by the train’s enigmatic creator, Wilford (Ed Harris). Before they get there, they have to contend with hired assassins, hatchet-wielding ninja armies, prissy schoolteachers, and Wilford’s grim factotum, Mason (Tilda Swinton).

“Snowpiercer” isn’t a perfect movie but it is an astonishing one. Bong takes the dystopian fantasies of such movies as “Blade Runner” and “Brazil” and compresses them into an elongated space that rushes forward on speed and story. The film’s visual imagination is baroque, insane, inspired, with each railway car a newly revealed universe of beauty and peril. The cast includes Jamie Bell (“Billy Elliot”), Octavia Spencer (“The Help”), and Bong regulars Song Kang-ho and Ko Ah-sung as drug-addicted locksmiths. “Snowpiercer” demands to be seen.

It almost wasn’t. Back in 2012, Harvey Weinstein of The Weinstein Co. bought US rights to the film based on its script and a few sample scenes, but when Bong turned in the finished film the distributor balked. The 126-minute runtime wasn’t as much an issue as the film’s dark tone, often brutal violence, and general creative weirdness. The wide release Weinstein envisioned now seemed risky; secondhand reports had company executives claiming the film wouldn’t be understood by audiences in Iowa and Oklahoma. Bong was told he had to cut 20 minutes or the film wouldn’t be released. In effect, he was being penalized for being too visionary. 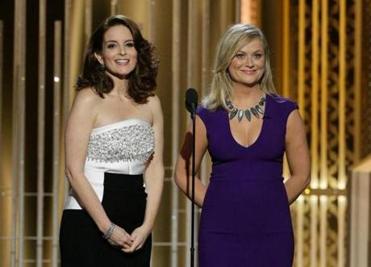 Hosts were the highlight at Golden Globes

The annual movie-TV-celebrity mishmash veered all over the place, trying to be all things to all people.

The expected Internet furor arose, centering around Weinstein’s long-established “Harvey Scissorhands” cartoon persona — the thick-fingered studio vulgarian trampling the rights of artists. Bong refused to make the edits, especially after a Weinstein cut reportedly tested more poorly than the director’s original. Meanwhile, “Snowpiercer” was released in Korea, France, and other countries to rave reviews and massive box-office returns. Finally Weinstein relented: Bong’s version could go out to US theaters — but only in limited release. Instead of playing 600 to 1,000 screens, “Snowpiercer” would be seen in 100 or so art houses and out-of-the-way multiplexes. Until Ned Hinkle, creative director of the Brattle Theatre, stepped in, the film’s only scheduled Boston-area theater was the AMC Loews Methuen 20, 31 miles from downtown Boston.

It seems downright punitive, as if Weinstein were saying that no one could see “Snowpiercer” if he didn’t get his way. And it’s certainly in keeping with other Tales of Harvey over the years, from his battles over final cut on movies like “Gangs of New York,” “Frida,” and “Sling Blade” to Weinstein’s recent dumping of James Gray’s “The Immigrant” — a great movie, but a delicate property that needs special care — in off-season art houses with minimal publicity. (“The Immigrant” doesn’t even merit a trailer on the distributor’s website.) Weinstein is rightly celebrated for almost single-handedly cultivating a mass audience for independent films over the decades, so why is he refusing to get these challenging new movies to audiences that would best appreciate them?

Perhaps because there’s a new game in town. A crucial decision seems to have been Weinstein’s relegating “Snowpiercer” to the company’s Radius/TWC subsidiary, which specializes in releasing movies in innovative multiplatform arrays that include theatrical, video on demand (VOD), and other outlets. This practice severely restricts which theater chains will agree to show a film, since most exhibitors believe that digital distribution cannibalizes their customers.

They’re terrified, in fact. Back in 2011, Universal tried to experiment with its comic Ben Stiller thriller “Tower Heist” by giving it a wide theatrical release, then sending it to VOD three weeks later in two cities. Theater owners rose up in arms, refusing to book the film at all until the studio backed down. There the matter lies: Many multiplex chains won’t show a movie whose VOD window is within 90 days of its theatrical release; others demand a restructured deal guaranteeing a higher box-office percentage to offset expected losses in ticket sales. While some independent distributors, like IFP and Magnolia (which owns the Landmark chain of art houses), release select films digitally the same day they come to theaters — a practice known as day-and-date — in most areas of the industry, VOD is considered the kiss of death.

In other words, once “Snowpiercer” went to Radius/TWC — with an as yet unspecified VOD release scheduled for a number of weeks from now — its shunning by theater chains was assured. Whether that’s what Weinstein wanted is unknown; repeated requests to interview him for this article were turned down. However, Radius co-president Tom Quinn — who has worked with Bong on three previous movies — emphatically stressed that “Snowpiercer” should be thought of as a big-screen experience first and foremost. “It is a theatrical launch,” Quinn said in a phone interview, “and I’m going head to head with ‘Transformers’ to make the direct statement that I feel this movie is as big, even though we’re not as widely launched. I know which one I would go see.”

What the “Snowpiercer” saga inadvertently reveals is an entrenched industry in the midst of a sea change while paddling against the current as fast as it can. VOD revenues aren’t reported by distributors — meaning there’s no way to compare those numbers with box office grosses — but the anecdotal evidence is clear. More people than ever are dialing up movies on their TVs, laptops, and phones via cable services, Roku and AppleTV boxes, NetFlix, iTunes, and Amazon. The only movies that still draw mass audiences to theaters are heavily promoted studio blockbusters — and even they last only a few weeks — and the occasional art-house hit like “Grand Budapest Hotel.”

Go to your cable service’s On Demand menu, though, and you’ll be confronted with a dizzying array of films you’ve never heard of. Some are coming off a small theatrical run — often only in major cities and intended to “tease” the digital release — and some never made it to theaters in the first place. They’re the B movies and direct-to-video titles of yesterday reconfigured for today’s technology, and many more of them are coming.

What that means for you, the moviegoer, is as yet unclear. At the very least, films that don’t strictly conform to the big-budget studio entertainment model — that are labors of love, or are challenging, or just different — will find it harder than ever to find a big-screen toehold in this paranoid new world. “Snowpiercer” may have been relegated to the exhibition boondocks because it falls between the audience cracks: It’s too violent for genteel art-house audiences, too weird for the mainstream. And yet it’s impossible to believe that an action-packed science fiction movie starring Captain America (with an 86 percent positive rating on Rotten Tomatoes, no less) couldn’t do a decent chunk of business for a few weeks in 600 theaters, especially if you kept it out of the way of the new “Transformers.”

Ultimately, Radius may deliver “Snowpiercer” to a broader, more appreciative audience than might pay attention at the multiplexes — and in all the film’s uncut glory — but it’s hard to shake the feeling that hell hath no distribution pattern like a Harvey Weinstein scorned.

• Melissa McCarthy and her husband team up

• Weinstein brothers, Miramax back together

• Review: Loud explosion of CGI in ‘Transformers: Age of Extinction’

• Four-star reviews by the Globe in the last year

• Movie reviews and news from the film world