If Hieronymus Bosch were alive and making movies, his name might be Bong Joon-ho, and “Snowpiercer” might be his “Last Judgment.” With this ferocious science-fiction saga — a visionary action flick studded with dark, rapturous detail — the Korean filmmaker ascends to the master level of commercial filmmaking, worthy of mention alongside Steven Spielberg, Christopher Nolan, Guillermo del Toro, and Alfonso Cuaron. Like them, Bong is able to yoke the mechanics of narrative cinema — sound and vision, craft and conscience — to ends that, at their best, carry a thrilling allegorical punch.

The film takes place entirely on a train, but not one that’s bound for glory. It’s 17 years after scientists tried to control global warming and failed miserably, plunging the planet into a new Ice Age. The remains of humanity have taken refuge on the title conveyance, a seemingly endless bullet-train, built by an enigmatic industrial Noah named Wilford, that annually circumnavigates the globe. The rich folk live at the front in swank compartments with excellent catering. The poor folks live in squalor at the rear.

The poor folks have had enough.

Led by a grim warrior named Curtis — Chris Evans, of “Captain America,” almost unrecognizable beneath a dark beard and darker scowl — the great unwashed of Snowpiercer boil forth in fury, battling forward car by car, working their way up the social ladder. They’re fought every step of the way not by Wilford but his minions: assassins in bespoke suits, an army of hooded ninjas with axes, and the leader’s second in command, Mason, who is played by Tilda Swinton as the homeroom teacher of your worst nightmares. Adapted by Bong and co-writer Kelly Masterson (”Before the Devil Knows You’re Dead”) from a French graphic novel, “Snowpiercer” is unrepentantly violent, but I suppose an end-times showdown between the 1 percent and everyone else would have to be. There’s a righteous savagery to this movie that’s almost but not quite obscured by the lushness of its imagined world.

Each new compartment is a universe unto itself; in one sequence, the dazzled heroes wander into an aquarium car, the walkway surrounded by thick glass behind which sharks swim two by two. A stumble into a classroom for the children of the wealthy turns into a sequence worthy of Terry Gilliam, the perky young schoolmarm (Alison Pill) packing heat and teaching her charges how to deal with those truculent plebes. 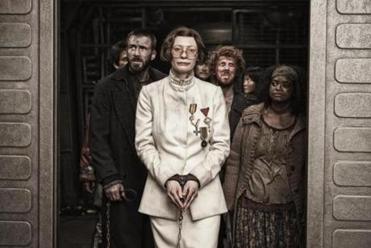 6/29: Harvey Weinstein and the saga of ‘Snowpiercer’

“Snowpiercer,” one of the very best films of 2014, opens in the Boston area Friday, and you almost didn’t get a chance to see it in a movie theater.

It’s probably no accident that Curtis’s mentor is named Gilliam (John Hurt), or that “Snowpiercer” bristles with the inventive social rage of “Brazil.” But Bong is less concerned with Kafkaesque comedy than brutally sardonic pop Marxism. The people at the back of this bus haven’t seen sunlight or a shower in 17 years; they’re fed on a steady, nasty diet of gelatin bars. If they get stroppy, they have an arm or leg removed; some of them are in danger of being whittled away to nothing. Every now and then Swinton’s officious Mason comes to take their children away, fodder for some horrific duties up front.

Yet there’s a tenderness between and among them that’s palpable, the result of shared miseries and past horrors that the plot eventually gets around to describing. Curtis’s protective relationship with the gentle young fighter named Edgar (Jamie Bell) goes beyond big brother/little brother or father/son; it’s the love that comes from surviving a war together. Octavia Spencer (Oscar winner for “The Help”) plays a fierce mama bear named Tanya, charging to the front in search of her son; Bong regulars Song Kang-ho and Ko Ah-sung turn up as a drug-addicted prisoner with lock-picking skills and his eerie young daughter.

Not all of these people will make it to the end credits, and, in fact, the body count in “Snowpiercer” is unusually high, a refreshing change of pace for a genre movie and a sign that Bong isn’t taking prisoners, least of all in the audience. The action scenes are fluid and consistently breathtaking, but they have an edge as sharp as those ninja axes. In the scene where the heroes open a compartment door and are confronted with the mass of hooded men — they can still fight in the dark when the train goes through a tunnel — there’s no comfort to the ensuing violence. Bong doesn’t wallow but neither does he look away; the sequence is meant to hurt and it does. For that reason (among others), it’s one of the greatest action scenes in recent memory.

“Snowpiercer” does develop engine trouble in its final act, as Curtis comes face to face with the man behind the curtain and the revelations tumble forth, some of them believable, others absurd. The scenes outside the train occasionally betray their digital origins, and while the film climaxes with a satisfyingly apocalyptic bang, it follows that up with a naive whimper.

But those are minor caveats. We’re regularly sold big-screen action-fantasy spectaculars that keep us entertained, well fed, and dull; mostly, they confirm that all is right with the world rather than prompting us to ask questions about it. Bong plays that game as well as any and better than most, and on the level of a popcorn thrill ride, “Snowpiercer” is a beaut. But he also sees how very far those in the back of the train are from those who are driving it, and so he imbues his shiny cinematic toy with a new and welcome emotion: anger.

- Harvey Weinstein and the saga of ‘Snowpiercer’

- More on the Movies page

Ty Burr can be reached at tburr@globe.com.
Loading comments...
Most Popular in arts
Real journalists. Real journalism. Subscribe to The Boston Globe today.