If there is one thing all cultures have in common, it’s this: When in doubt, blame the parents.

That’s certainly the first resort of Albert and Jennifer Chen, the ostensibly adult Chinese-American siblings who are at the center of Mike Lew’s “Tiger Style!,’’ a sharply observed comedy at Huntington Theatre Company about the vexing and infinitely complicated business of wrestling with one’s heritage, both familial and ethnic.

Breezily directed by Moritz von Stuelpnagel, with a snazzy and versatile set designed by Wilson Chin, “Tiger Style!’’ sets out to lampoon the stereotypes that surround Chinese-Americans while also illustrating how weighty those stereotypes can feel when you’re the one laboring beneath them.

Whatever one’s ethnicity, the distance between who we are and how others see us is fertile dramatic territory, and playwright Lew is a witty guide through that territory, though the play could cut deeper than it does. In his perpetual quest for the next good one-liner — and there are lots of them — Lew sometimes sacrifices depth. Especially when the action shifts from the United States to China in Act 2, “Tiger Style!’’ seems overly determined to earn that exclamation point in the title.

But “Tiger Style!’’ manages to generate an impressive number of comic sparks from the collision between expectations and outcomes, blending the particulars of two young Chinese-Americans chafing at invidious cultural assumptions with a broader portrait of millennials and their discontents. 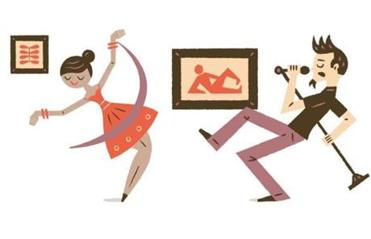 Want the Globe’s top picks for what to see and do each weekend e-mailed directly to you? Sign up now for The Weekender.

Albert, portrayed by the very amusing Jon Norman Schneider, is in his early 30s. Albert’s older sister, Jennifer, played by the equally funny Ruibo Qian, is also in her 30s. Schneider and Qian complement each other perfectly. They deftly capture the squabbling big sister-younger brother dynamic, and each actor brings a different air of spiraling desperation to the dilemmas their characters face.

Jennifer and Albert were high achievers in their youth. They both went to Harvard (she graduated in three years). She played piano — “I was the first MD/PhD ever to sell out a concert at Carnegie Hall,’’ she boasts — and he played cello. She became an oncologist; he became a software programmer. But, to their dismay, they have ended up with neither the professional fulfillment nor the romantic satisfaction they anticipated. Their meticulously constructed life plans have gone awry somehow.

Jennifer, mindful of the ever-louder ticking of her biological clock, has just been dumped by her lunkhead boyfriend, Reggie (Bryan T. Donovan), who helpfully explains that at first he found her “exotic’’ but then grew disappointed she wasn’t more “submissive.’’ (Qian is hilarious when Jennifer vamps in an effort to be “submissively domineering.’’) Albert has just been passed over for a promotion at his medical software company — a promotion that went instead to a slacker colleague, “Russ the Bus’’ (Donovan again), who has been deriding Albert as “a robot’’ while expecting him to shoulder most of the workload.

It’s as if the once-promising Jennifer and Albert have become living illustrations of those bleak lines from Philip Larkin: “Life is an immobile, locked,/Three-handed struggle between/Your wants, the world’s for you, and (worse)/The unbeatable slow machine/That brings what you’ll get.’’

In their quest for answers to why their lives have not been the unbroken success stories they expected, Jennifer and Albert settle on their mother and father as scapegoats. They decide it would be cathartic, even “downright therapeutic,’’ in Jennifer’s words, to confront mom and dad and demand an apology for the “tiger parenting’’ that allegedly left the siblings with unrealistic expectations and inadequate life skills. “I’m gonna yell at my mom like a white girl!’’ Albert vows.

However, mom (Emily Kuroda) and dad (Francis Jue, excellent in multiple roles) prove blithely unrepentant. They essentially tell their children to stop whining. So Albert and Jennifer kick it up a notch: They embark on a trip to China, the ancestral homeland, as part of an “Asian Freedom Tour’’ that will theoretically enable them to start anew, to reinvent themselves. Reasons Albert: “If we can’t escape a racialized context in America despite being Americans, then we go be Chinese in China, where race is no longer a factor.’’

How does that work out for them? No spoilers here. But it’s worth remembering that the road home can sometimes be a very winding one.

Don Aucoin can be reached at aucoin@globe.com.
Loading comments...
Most Popular in arts
Real journalists. Real journalism. Subscribe to The Boston Globe today.