For the thousands of Market Basket workers and customers who had protested his ouster, Arthur T. Demoulas’s deal to buy out his cousins’ share of the family grocery empire was a triumphant end to six weeks of organizing, agitating, and waiting.

While some paused to digest the details Wednesday night or reflect on the cost and consequences of their efforts, most simply responded with joy. Several were in tears when they heard the news.

“Wow. I feel like I won the lottery,” said Buddy Wemmers, a Market Basket truck driver. “What a huge relief.”

For many employees, the back-and-forth negotiations and false starts of the past week represented a nerve-racking detour from the optimism that dominated earlier weeks of protests.

“I was actually really starting to worry things weren’t going to go the way we wanted,” said Ann Rogers, 55, who works in the accounts payable department at the company’s Tewksbury headquarters. “This is just fantastic.” 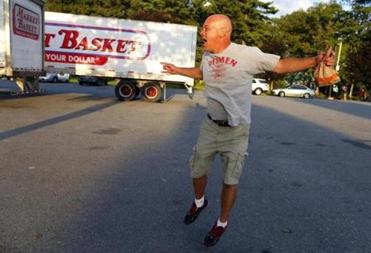 Rogers said the apparent resolution of the feud has been a long time coming.

“I’ve been working with this company for 28 years, and this has been hanging over the company’s head the whole time,” she said. “This fight was absolutely worth it. We wanted to make sure the right person had control.”

The improbable success of the employees’ grass-roots campaign, which included walk-outs, rallies, and more than a few online manifestos, stunned longtime observers of the grocery industry and captured the imagination and attention of a region.

“To have an internal uprising of just about everyone, without a union, is very unusual in American industry,” said David Lewin, professor of management at the University of California Los Angeles. “And it’s even more unusual for workers to say, ‘We want this guy to come back’ — and to have him actually come back.”

Under the terms of the deal, announced around 11 p.m., Arthur T. Demoulas and his siblings will buy the 50.5 percent of the company owned by their cousin, Arthur S. Demoulas, and other relatives on his side of the family.

The long-promised pact between the two bitter, entrenched factions of the Demoulas clan took weeks to craft, an agonizing delay that strained the patience of protesting workers and boycotting shoppers alike.

But even as thousands of employees lost their hours and paychecks, a cadre of middle managers lost their jobs, and boycotting customers lost their patience, most refused to abandon their cause. News of their vindication arrived in breathless phone calls and euphoric messages posted on social media sites, where the protest movement blossomed. Hundreds of triumphant posts bubbled up on Facebook and Twitter as various media outlets reported the news.

“It’s going crazy online,” said Debbie Simon, a customer from Litchfield, N.H., who was boycotting the chain, as Facebook notification tones steadily rang out in the background during an interview with a Globe reporter. Thursday morning, she said, she would go to her local Market Basket and “buy whatever I can, and I’m going to shake the director’s hand.”

While the deal is finalized, under the terms of its terms, Arthur T. will work alongside Felicia Thornton and James Gooch, the co-chief executives who were hired by his cousin to replace him but were demonized by many employees. Arthur T. will have full operational control of the company, however.

The agreement came at a critical point. With Market Basket’s cash flow choked off and bills mounting, the company’s board of directors was considering a radical plan to shutter 61 of the chain’s 71 stores and lay off most of its 25,000 workers.

Though it avoided that drastic step, many challenges await the reborn company. Newly encumbered with debt, Market Basket is faced with questions about whether it can reboot its low-margin, high-volume business model — not to mention its generous profit-sharing plan.

But most employees and customers said such worries were best left for another day. For them, Wednesday’s deal was nothing less than a decisive victory.

“I’m not worried at all. We’re going to come back bigger, better, and stronger,” said Wemmers, the truck driver. “We’ll tighten our belts a bit, but in the long run, we’re going to be a tighter company, a better family because of all this.”

For the employees, the deal means a suddenly busy schedule — and, many hoped, an imminent return to work for part-time employees.

“I know all employees will do their utmost to make the Market Basket shopping experience the same or better than before,” said Stephanie Schwechheimer, the manager of a Market Basket in Haverhill. “I don’t doubt that all of the associates would do it all over again.”

As the weeks wore on, some customers and workers started to see the protests as standing for something larger. In a country where massive corporations wield increasing power, they said, the Market Basket saga was a battle in a larger war against the decline of both middle-class jobs and family-owned businesses where employees come before maximum profit.

“If there’s anything people should take from this, it’s that America is hungry for this kind of success story where everybody wins: the customers, the employees, and the people who run the show,” said Shawn Dwyer, a manager at the Burlington Market Basket store.

Dwyer said he and other Arthur T. supporters initially underestimated the difficulty of achieving their goals.

“I thought after two weeks, they would realize Arthur T. was the best person to run the business and we’d be back to work,” he said. “We didn’t realize how thick the animosity was until we stepped in it.”

But with the animosity seemingly swept aside, workers said they are itching to get back to work and begin the daunting task of blowing the cobwebs off the half-shuttered chain.

“I am relieved that our focus can now shift from getting it done to bringing it back,” said Steve Paulenka, a fired Market Basket manager who has organized protests calling for the return of Arthur T. Demoulas. “Make no mistake about this: we made history.”

Coverage of the Market Basket feud:

Dan Adams can be reached at dadams@globe.com. Find him on Twitter at @DanielAdams86. Jack Newsham can be reached at jack.newsham@globe.com. Follow him on Twitter @TheNewsHam. Callum Borchers of the Globe staff contributed to this report.
Loading comments...
Most Popular in business
Real journalists. Real journalism. Subscribe to The Boston Globe today.