By the end of this century, the romance of Venice might be a lot closer to Boston than you’d expect — like just off Storrow Drive.

A report scheduled to be released Tuesday about preparing Boston for climate change suggests that building canals through the Back Bay neighborhood would help it withstand water levels that could rise as much as 7 feet by 2100. Some roads and public alleys, such as Clarendon Street, could be turned into narrow waterways, the report suggests, allowing the neighborhood to absorb the rising sea with clever engineering projects that double as public amenities.

The canal system was among the more imaginative solutions offered by some of the city’s leading planning, architecture, and engineering firms in a report compiled by the local chapter of the Urban Land Institute.

Other suggestions include raising the Harborwalk, which rings the waterfront, to act as a stronger barrier for nearby buildings, adding breakwaters in the harbor, and creating wetlands that would act as sponges during periods of high water.

The authors said the ideas are intended to show how the region can respond creatively to the dramatic effects of climate change. 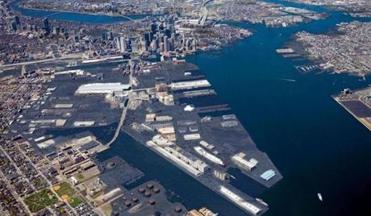 By 2100, sea levels around Boston will rise as much as 7.5 feet, according to climate scientists.

“This is a change that’s coming whether we want it or not,” said Dennis Carlberg, director of sustainability at Boston University, who helped compile the report. “Instead of being afraid of the problem, we need to embrace it and think about opportunities it offers us.”

Climate scientists argue that climate change is no longer an abstract idea and that in the space of a single life span, parts of coastal Boston could be under water.

By 2100, climate scientists predict, sea levels around Boston will rise as much as 7.5 feet; in just a few decades water levels will be 2.5 feet higher than they are today. That could mean significant flooding not only during big storms but twice daily during high tides, as well as at times of normal rainfall.

The precise amount of sea- level rise is uncertain, but state and municipal leaders say they are taking the threat seriously, even if they are not yet at the stage of redesigning whole neighborhoods.

“We’re not going to start digging the canals tomorrow,” said Brian Swett, Boston’s chief of energy, environment, and open space. “But the report makes the important point that you can’t solve 6 feet of sea level rise simply by building a bigger dam on the Charles River.”

Boston, Cambridge, and other municipalities are working on climate change ideas to address the increased threat of coastal flooding. Earlier this year, Governor Deval Patrick’s administration launched a $50 million effort to develop a statewide plan.

The Urban Land Institute, a national real estate association, held brainstorming sessions over the last several months involving more than 70 engineers, architects, and development and insurance specialists, among others, to examine how rising sea levels would affect four representative areas: the Back Bay, the Innovation District in South Boston, Revere Beach, and the Alewife section of Cambridge.

In addition to considering canals and higher sea walls, the group called on municipalities to discuss ways to raise money to prepare vulnerable areas and alter building and zoning rules to make way for inevitable flooding.

“We’re at the point of really thinking what we need to do differently, given the future we’re facing,” said John Bolduc, an environmental planner for the City of Cambridge. “We’re all going to have to cope with more flooding.”

In the low-lying Alewife section, new residences might have to be concentrated into taller buildings with more space between them to make room for water infiltration. The report also suggested that retail shops be concentrated into a raised corridor to keep them above flood waters.

The Urban Land Institute encouraged Revere city officials to raise sidewalks along the beach above the flood plain to create opportunities for retail development and a more active boulevard for shoppers and beach-goers.

By far the most dramatic changes were suggested for the parts of Boston most vulnerable to rising sea levels. The report includes a rendering showing that much of the Innovation District would be inundated if water levels rise by 7.5 feet.

It proposed raising the Harborwalk by several feet and adding tidal landscaping, such as marsh grass. And instead of simply building a bigger barrier, the report calls for inlets, small canals, open spaces, and other ways to absorb and divert water as it courses inland.

Such an approach could also create space for additional retail shops along an elevated walkway or even a light rail line.

The threat facing the Back Bay is similarly dire if the sea rises to the upper levels that have been predicted. The Charles River Dam, designed in the 1970s, was built under the assumption that water levels would rise at a pace of a half-foot per century, a fraction of the rate currently predicted.

That could mean significant flooding well before the end of the century in the Back Bay, which was mostly wetlands before city officials added landfill in the 19th century. Much of the neighborhood is just 4 feet above high tide. The Urban Land report suggested that a large network of canals could be constructed along streets to use the water in ways that evoke Amsterdam or Venice.

The canal system would run throughout the Back Bay, reaching as far as the Massachusetts Turnpike and turning major roads such as Storrow Drive into new waterways.

The system would also include flood-control gates and artificial wetlands, as well as bridges over the canals.

While they most certainly would take up many coveted parking spots, the canals would not only keep the flood waters at bay but provide a novel way to navigate the densely packed neighborhood.

“You have to look at ways to protect the value in our communities,” said Carlberg of Boston University.

“If you just build bigger dams to keep the water out of the Back Bay, you could end up with an unwalkable community. So this is one way to look at it differently.”

Casey Ross can be reached at cross@globe.com.
Loading comments...
Most Popular in business
Real journalists. Real journalism. Subscribe to The Boston Globe today.