The family that owns the James Hook & Co. seafood store in Boston wants to build a residential tower and restaurant on the property that would fill in one of the last development sites on the downtown waterfront.

A rendering of the project shows a 22-story glass building on Atlantic Avenue at the entrance to the Seaport district with a 9,000-square-foot Hook seafood restaurant on the ground floor. The new restaurant would offer outdoor dining on a deck perched over Fort Point Channel.

“We want it to be a signature building,” said William Zielinski of SKW Partners Inc., which is working with the Hooks. “The idea is to make it inviting and warm. There will be a lot of glass and pedestrian access on all four sides.”

The Hook family has outlined the project for a city panel that is considering zoning changes on the downtown waterfront. Current regulations limit buildings along Boston Harbor to 55 feet tall.

The new Hook building would be as high as a neighboring development, the Intercontinental Hotel, which was built under a different set of zoning rules, Zielinski said. The Hooks will file a formal proposal with the city once the zoning review is finished, he added. 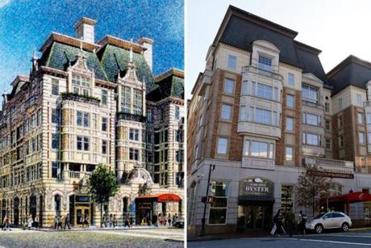 Renderings have power to make or break projects

A bad first impression from computerized renderings can literally send a development back to the drawing table.

Known for their lobster rolls, the Hooks have operated a seafood store on the property since 1925. Their original building was destroyed by fire in 2008.

If approved, the proposed tower would fill in one of the last undeveloped properties along Atlantic Avenue. In recent years, developers have added the Intercontinental Hotel as well as the 31-story office, retail, and residential complex at Atlantic Wharf.

The Hooks are working with Elkus Manfredi Architects of Boston to design the new building for the site. Zielinski said they have not determined the number of residential units, or whether they would be apartments or condominiums.

• Renderings have power to make or break developments

Casey Ross can be reached at cross@globe.com.
Loading comments...
Most Popular in business
Real journalists. Real journalism. Subscribe to The Boston Globe today.