It was a moment that might have sailed through your social media feed without notice: an Instagram selfie taken by model and television star Heidi Klum. In it, her mascara-clad eyes peer mysteriously over a massive Dunkin’ Donuts cup.

“Guess what i am doing today,” Klum wrote in a punctuation-free tease to her 3.6 million followers about an upcoming episode of “America’s Got Talent.’’

The image got more than 37,000 likes. It also got Klum a letter from the Federal Trade Commission telling her that if she had a financial relationship with Dunkin’ Donuts, she must disclose it in any social media postings.

In April, the FTC announced that it had sent out 90 letters to specific brands, along with the celebrities, athletes, and other popular Instagrammers that those companies partner with on the social media site. The letters said that they would need to more “clearly and conspicuously” identify relationships when endorsing or promoting products.

Through a public records request, the Globe procured copies of those letters, which were sent to 52 influencers and 46 brands. 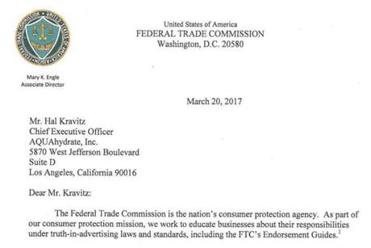 The Federal Trade Commission contacted a number of companies about social media posts made by celebrities on their payroll.

Jennifer Lopez got a notice for posting a photo of her posing seductively with several bottles of Beluga Vodka. Nicole “Snooki” Polizzi got one for extolling the virtues of Flat Tummy Tea. Sofia Vergara’s image of an armful of diamond bracelets also caught the eyes of the FTC, as did Lucy Hale’s pictures of herself wearing star-studded shoes and pineapple emoji pants.

The documents reveal the wide array of ways that Instagram influencers use the social media platform to promote brands, often in ways that may go unnoticed as paid advertising. Perhaps more important, it demonstrates that in an age when anyone can be a celebrity and everyone is online, anything can become an ad.

Advocates say that influencers can be paid as little as a few hundred dollars upwards to six figures per post, based on the size of their following.

It was the first time that the commission reached out to inform individual influencers about how they should communicate with their fans. An FTC spokesperson said the commission did not have information confirming that any payments were made, and considered the letters educational in nature. No fines or other penalties were assigned. A set of accompanying guidelines also suggests that influencers prominently use the hashtag #ad at the beginning of their post.

“There are no bright lines, the definition of celebrity in modern American culture is a moving target,” said Steven Helland, an attorney who represents ad agencies and brands. “And with the rise of a YouTube star or an Instagram star that may be very well known in some contexts but totally unknown to most people living in the US, it raises challenging questions for both for the regulators and the regulated.”

That’s in part because the FTC guidelines also suggest that when a high enough profile person is seen wearing, or drinking, or otherwise promoting a brand, that any reasonable consumer can assume that he or she is being paid. And in that case, the person may not need to disclose any relationship. Think of Tiger Woods wearing Nike, for example.

So it leaves one to wonder: Is Heidi Klum a Dunkin’ Donuts fan, or a paid sponsor?

Like so much happening in this space, the answer isn’t black and white.

Dunkin’ Brands does have a “multi-platform partnership” with Klum’s show “America’s Got Talent,” and the company’s cups are prominently displayed on air.

But “Dunkin’ Donuts does not have a contractual relationship with Ms. Klum and did not partner with her for any paid social content,” the company said in a statement, adding that company policy requires “all paid social posts or sponsored content to be clearly identified as such.”

A representative for Klum did not respond to requests for comment.

Some of the Instagram posts flagged by the FTC were somewhat similarly vague, like the ones posted by “Pretty Little Liars” actress Hale, whose 18.1 million followers saw her sharing images of herself bedecked in Chiara Ferragni shoes and We The Dreamers leggings as though they’d come from her closet. Vergara also received a letter for a photo of her wrist clad in Dana Rebecca bracelets. (Vergara has 12.5 million followers, 75,300 of whom liked the post.)

Both actresses namechecked the brands in their posts. Representatives for Hale did not respond when asked for comment, and Vergara’s publicist declined to speak on the record.

Other images were far more explicit, like when Lopez, Polizzi, and Lindsay Lohan took highly stylized pictures of themselves with products. Lopez thanked the Beluga Vodka brand directly in her post. Polizzi included a 20 percent off shoutout for Flat Tummy Tea. And Lohan mentioned the Pinnertest website.

Representatives for each of the three actresses did not respond to requests for comment.

Former NBA star Allen Iverson also received a letter after posting an image of himself holding a IO Moonwalker Hoverboard, thanking the brand for the $1,000 gadget. Attempts to contact Iverson for comment were unsuccessful.

FTC regulations stipulate that anyone who has a “material connection” to a company must disclose it in any paid endorsement. That can typically mean someone who works for the company or is being compensated to promote it, said Helland. And those payments can be in the form of cash or in-kind items like free products. The FTC is just beginning to scrutinize these practices.

“I think that brands have come to realize that this is an efficient and effective way of marketing,” said Bonnie Patten, the executive director of Truth In Advertising. She said that new guidelines by the commission that require promotional hashtags to appear at the top of posts are a start, but they’re not enough.

“We’ll see an Instagram post goes up with an ad, and it won’t disclose it, and the next day they’ll add the hashtag #ad,” to avoid scrutiny, she said. But most post engagement happens within the first 10 hours of posting, so the brands have already “gotten all the bang for the buck.”

Patten said the FTC’s letters were an important move in the right direction.

“One thing that is infuriating to me is that some of these letters went to well-known organizations,” she said. “And shame on them, because they know what the rules are.”