Boston ended up losing the Summer Olympics for 2024. But now there’s a good chance we’ll land the World Cup for 2026.

FIFA, soccer’s governing body, today picked a North American bid over a rival proposal from Morocco. From New England Revolution president Brian Bilello’s perspective, the World Cup is bigger than the Olympics, in terms of capturing global attention — or at least that’s how he explained it in a celebratory press conference Wednesday.

The so-called United bid from the US, Canada, and Mexico features 23 possible locations, including Gillette Stadium in Foxborough. Bilello expects the home of the Revs to remain in the mix after FIFA winnows that list down in two years. It helps that his boss Robert Kraft is the honorary United chairman.

Unlike Morocco, North America has enough stadiums. No need to build new ones.

Separately, the Kraft Group is still working on finding a site for a 20,000-plus seat soccer stadium for the Revs in Boston. That would be too small to host World Cup games, but it could serve as a practice facility. Anticipation of the World Cup’s return — the event came here in 1994, too — presumably would help build positive public sentiment for a Boston stadium. 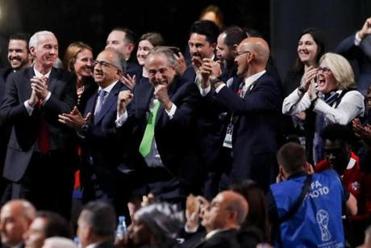 The joint bid by the United States, Canada, and Mexico was chosen over Morocco to stage the first 48-team World Cup.

The Krafts aren’t saying where in Boston. The old Bayside Expo site is out; talks fell apart last year amid community concerns. Maybe they will revisit an earlier contender: a city-owned, 18-acre stretch off the Southeast Expressway used for a tow lot and city fleet parking. Widett Circle, an industrial property next door, is also being considered for redevelopment.

Those properties were once key to Boston’s doomed Olympics bid, which stirred fears that taxpayers would get hit with a big bill. The Krafts aim to sidestep those concerns with the World Cup by establishing a nonprofit group, called Boston Soccer 2026, that would act as a private-sector backstop to ensure the public won’t get stuck with the tab.