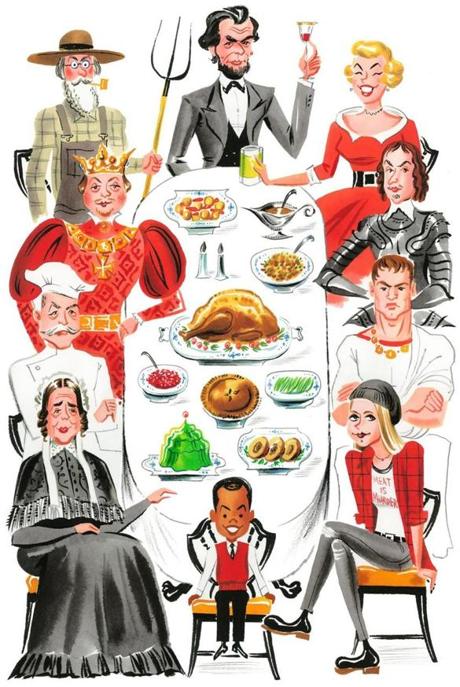 Maurice Vellekoop for The Boston Globe

ON THURSDAY, almost nine out of ten Americans will gather around Thanksgiving dinner—some version of the traditional family-style meal of roast turkey, stuffing, cranberry sauce, and pie. And once again the accepted wisdom about how the Thanksgiving meal took root and what it means will be rolled out.

This story is as much a tradition as the meal itself. Even if we doubt the schoolroom version of an unbroken tradition going back to a founding feast shared by Native Americans and Pilgrims, it is still easy to think of Thanksgiving as a celebration of the bounty of the New World, an American custom whose origins are lost in the mists of time.

But food—what we eat and why we eat it—is rarely as simple as the tales we tell about it. In the case of Thanksgiving, a closer look at the history of the dishes we set out and how they came together on our tables suggests a different story.

Thanksgiving as we know it today—a holiday that brings family and nation together over roast turkey—took shape 150 ago. And although it is certainly built on American culinary traditions, the meal we’ll eat on Thursday is also built around a political principle. It is a deliberate, small-r republican contrast to the haute cuisine that for millennia had been served at events of state.

Food can embody ideas as well as customs, and our standard Thanksgiving draws on a long tradition of antimonarchical political and culinary thought. These ideas had deep European roots in France, England, and the Dutch Republic, and even before that among Roman republicans and the Church fathers.

Political philosophers and cookbook authors alike had long railed against the appetizers, complex sauces, sweets, and expensive, imported ingredients central to high cuisine. Indulging in these created an appetite for expensive luxuries that, it was widely believed, ruined the individual, the household, and the nation. But it was in the United States that the simple meal that these people advocated became a national celebration embracing all citizens.

Starting in the 1840s, Sarah Josepha Hale, a novelist and editor of Godey’s Lady’s Book, the nation’s most widely circulated women’s magazine, campaigned in print and in letters to politicians to extend Thanksgiving, a holiday already celebrated in New England, to the country as a whole. She finally persuaded Abraham Lincoln to declare a national holiday in 1863. It was, in Lincoln’s words, intended to restore “peace, harmony, tranquility and union” to a nation torn by the Civil War.

At that time, the ruling classes in much of the world dined on French haute cuisine, widely regarded as a mark of a civilized, progressive nation. From Britain to Russia, from Mexico to Japan, and in the United States as well, diners dressed in formal attire sat at tables set with expensive crystal, china, and silver. Servants passed a sequence of richly sauced meats, elaborate molded desserts, and hothouse fruits that neither they, nor the professional cooks who prepared them, could enjoy. It was everything the anti-aristocratic republican tradition was arguing against.

To Hale and others like her, a feast based on such haute cuisine, far from being the hallmark of a modern nation, would only perpetuate the monarchic traditions so firmly repudiated by “our Great Republic.” To make good on its political ideals, the new state had to find a middle way—a meal that lay somewhere between the extravagance of Old World aristocratic feasts and the scanty fare of the common people.

The will to bridge this gap had long been at work in American political thought, and had long been expressed through food. In the 1760s, as a patriotic protest the Daughters of Liberty had organized boycotts of expensive imported tea, offering recipes for local herbal alternatives. In 1796, a few years after crowds in Paris had protested the king’s failure to ensure their daily bread, Amelia Simmons, the author of the first American cookbook, “American Cookery” (1796), promised her readers pies and cakes “adapted to this country and all grades of life.” And Lydia Maria Child’s “Frugal Housewife” (1829), which went through 32 editions in the succeeding 25 years, preached the values of the simple home-cooked meal as truly republican.

In her magazine, Sarah Hale published recipes for roast turkey and pumpkin pie, and popularized homecoming for the holiday through sentimental poems, images, and stories of “traditional” Thanksgivings. In the Union states, at least, her campaign finally found a receptive audience, accustomed through long tradition to the notion that household meals of national ingredients contributed to the flourishing of the greater American family. Although the wealthy continued to dine French-style on other occasions, and although the South was not to accept it until after Reconstruction, Thanksgiving was on its way to being the celebration we recognize.

Turkey, a large, affordable, and readily available fowl, allowed the whole family generous servings of meat. Pumpkin pie could be prepared by the housewife in the home kitchen. Children, traditionally barred from aristocratic tables, were expected at the meal as well, to be physically nourished by ample, wholesome food and mentally nourished as they absorbed civic principles from the adults’ manners and conversation.

Neither turkey nor pie nor any of the other dishes that appear on the Thanksgiving table was a new invention. All of them had appeared in other times and other contexts. Gravy was a democratized version of lush sauces served at court; cranberry relish has origins that stretch through medieval Europe to Islam. This thing we now call tradition was a creative reworking of culinary elements from different, often even unrecognized cultures to create a feast that in its accessibility to all citizens was uniquely American.

Over the years, as the Thanksgiving dinner has spread to all regions, all faiths, and successive waves of immigrants within the United States, it’s been easy to forget what a radical achievement it was, and what a specific expression of American ideas. When we look across the table on Thursday, we see a meal both more politically American and more philosophical than many of us give it credit for. What could be more worthy of thanks?

Mouse over images below (or tap on a mobile device) to read each item.