“Womxn” isn’t a typo. It’s a powerful, increasingly popular label, encompassing a broader range of gender identities than “woman” — or even older feminist terms such as “womyn.” Events such as January’s “Womxn’s March” in Seattle and “Womxn’s Energy Week” at Kirkland College have drawn attention to a word distinctly of our time: a nontraditional spelling for people whose gender identity doesn’t fit in the traditional boxes.

“Womxn” is one of a few similar lexical and social phenomena, including the adoption of “x” in naming LGBTQ and non-gender-binary people. The most well-known such term is “Latinx,” which can take the place of “Latina” or “Latino.” As Raquel Reichard wrote for Latina magazine, “Latinx, pronounced ‘La-teen-ex,’ includes the numerous people of Latin American descent whose gender identities fluctuate along different points of the spectrum, from agender or nonbinary to gender non-confoming genderqueer and genderfluid.” Ben Zimmer, language columnist for The Wall Street Journal, has noted many similar terms, such as “Chicanx,” “Xicanx,” and “Filipinx.” “Womxn” blends in with these terms as much as it stands out from standard spellings.

The unpronounceable boldness of “womxn” is part of its appeal. Nita Harker, an assistant professor of sociology at Whatcom Community College in Bellington, Wash., and co-organizer of a “Womxn’s March” there, understands how the word “can come across as challenging and confusing.” Harker said, “I actually think the challenge — particularly that it is hard to pronounce in your mind as you read it, that it forces one to stop and think, that it is not just easy and nice and recognizable — is part of the point and the draw. To me it represents the complexity of gender.”

Thanks to a long history as an x-factor in language and math, “x” is the perfect letter for representing, well, anything. Lal Zimman, assistant professor of linguistics at UC Santa Barbara and author of the Trans Talk blog, cited the history of X as a “stand-in mark,” mentioning how Malcolm X used the letter to represent his lost pre-slavery name. Zimman said putting “x” into “women” draws attention, not just to an unusual word, but to “the ways we don’t notice when men are treated as the default kind of person.”

While “womxn” goes beyond feminism, especially traditional white feminism, it also builds on a rich history of feminist respellings. The spelling “womyn” has been around since at least 1975, when it turned up in an issue of Lesbian Connection: “Wolf Creek Womyn’s Festival — July 1975. . . . The first circle-womyn gathered under some pine trees to share our names and our needs for these five days.” 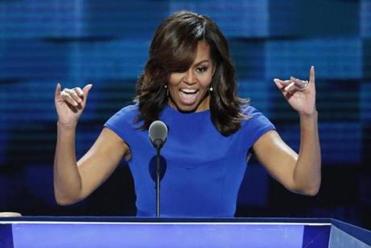 ‘First lady’: An archaic term for a dynamic role

How ladylike is the title anyway?

“Womyn” is only the most famous alternative spelling. “Womin” and others can be found, but “wimmin” has a particularly complex history. Since the early 1700s, this spelling has been used to portray various dialects and folksy speech patterns. In 1938, it turned up in the book “Snow White and the Seven Dwarves.” “ ‘Didn’t I tell you?’ sniffed Grumpy. ‘She’s crazy. Wimmin! Pah!’ ” But in the mid-1970s, this spelling was also embraced by the feminist movement, since — like “womyn”—it avoids “man” and “men.”

Additional feminist respellings include the very popular term “herstory” (which has been around since at least 1970) and “riot grrrl” (a feminist punk music movement from the 1990s, involving bands such as Bikini Kill and Huggy Bear). Less popular but similarly motivated coinages include “empowherment.”

The rules of English spelling — so inconsistent and arbitrary yet seemingly set in stone — offer a perfect model for anyone, feminist or not, who wants to change society, too.

One recent “x” word is both broad and specific: “folx,” which is defined by Word Spy lexicographer Paul McFedries as an umbrella term for people with a non-normative sexual orientation or identity. While this spelling has been around for nearly a century, the meaning similar to “Latinx” and “womxn” is a recent innovation.

“Folx” is kind of brilliant. Even with the usual spelling, “folks” is an inclusive word, avoiding the gender associations of “guys,” “dudes,” and other male-associated words. That “x” retains the traditional pronunciation but opens the tent wider. Zimman praised this word for “suggesting solidarity” and representing “the everyday people.” Society has a long way to go, but maybe someday we can all just be folx.

Mark Peters is the author of the “Bull[expletive]: A Lexicon” from Three Rivers Press. Follow him on Twitter @wordlust.
Loading comments...
Most Popular in ideas
Real journalists. Real journalism. Subscribe to The Boston Globe today.