The Boston Police Department has gone for long stretches without even issuing one. Talk to any resident who’s done even a small amount of walking in the city, and they’ll tell you the same thing: They’ve never gotten one, nor do they know anyone who has. Some locals insist, not without reason, that they don’t actually exist at all.

In Boston, the jaywalking ticket — which comes with a mammoth fine of $1 — has proven so elusive that it borders on myth.

So in the wake of recent pedestrian-related news — including a protest sparked by Mayor Martin J. Walsh’s comments about pedestrian and cyclist responsibility — I spent a day jaywalking my way through Boston, in an attempt to find out what, exactly, it took to get cited for the offense.

And one thing was for sure: I wasn’t leaving without a ticket.

Armed with nothing more than a sturdy pair of walking boots and a healthy dose of determination, I set out for downtown and a day of lawlessness, off to see just how much jaywalking one man could get away with. 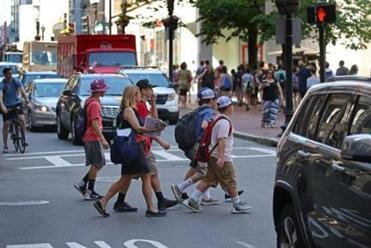 Woe to anyone who honks at them in frustration.

Over the course of the next four hours, I turned the busy streets of Boston into my own personal sidewalk.

I jaywalked through red lights and across the middle of blocks, past alleyways and against traffic. I jaywalked alone and in groups. I jaywalked while looking down at my phone and while staring up at buildings. Sometimes, when I was feeling especially brazen, I jaywalked diagonally across intersections.

The laws governing my fellow pedestrians were of no use to me. To others, maybe, the little red hand on the crosswalk signal meant “STOP.” To me, it was saying, “Five more seconds, buddy.”

I jaywalked past the Public Garden, not far from the sculpturehonoring the “Make Way for Ducklings” crew — arguably the most celebrated jaywalkers in history.

During the lunch hour, I jaywalked while eating a steak-and-peppers sub.

By mid-afternoon, however, having still failed to capture the attention of the authorities, I decided to turn things up a notch. Play a little hardball.

‘I jaywalked past the Public Garden, not far from the sculpturehonoring the “Make Way for Ducklings” crew — arguably the most celebrated jaywalkers in history.’

I began jaywalking even when I didn’t need to. I jaywalked on the way to other jaywalks. Sometimes, I jaywalked while staring directly into the eyes of an oncoming driver, as a way to assert my dominance. I jaywalked in front of a cop who was overseeing a construction site.

Still, by late afternoon, I hadn’t managed so much as a dirty look, let alone a ticket.

Finally, around 4 p.m., I stumbled on a golden opportunity. While jaywalking near Park Street Station, I came across a Boston Police SUV parked near the intersection of Tremont and Winter streets, a cop behind the wheel. I immediately set about trying to get myself ticketed.

For the next couple minutes, I jaywalked back and forth in front of his vehicle. On each trip, I tried to be a little more outrageous, and by my final jaunt, I made a real show of it. At least two cars were forced to come to a stop while I ambled toward the opposite sidewalk.

If it wasn’t clear before, it was now: Boston police really don’t like giving out jaywalking tickets.

Now, at this point, most peoplewould probably concede defeat. They’d take a long, hard look at themselves and — as difficult as it might be to do — admit that maybe they weren’t the people they thought they were.

But I’m a lot better than most people.

Which is why, later that evening, I hopped off the subway downtown, strode across New Sudbury Street — illegally, of course — and walked into the Boston Police Department’s downtown precinct, to turn myself in.

Walking up to the glass partition, behind which a handful of cops had gathered, I confessed to everything.

How I’d spent the day on a veritable crime spree, breaking jaywalking law after jaywalking law. How I’d made a public mockery out of Massachusetts General Law, chapter 90, section 18A.

Actions had consequences, and I was ready, I told them, to accept mine.

“Is there somebody here who could write me a ticket for jaywalking?” I asked.