One musician who has visited the underground concert hall likens it to the setting of “Phantom of the Opera.” Another calls it “an acoustic marvel” that, if not a secret to virtually all Bostonians, remains a buried cultural treasure seldom seen and rarely talked about.

Steinert Hall, a state-of-the-art theater when it was constructed a century ago deep beneath Boylston Street, once attracted some of the world’s finest classical musicians. Long shuttered, it remains largely out of public sight, a ghost figure on the cultural landscape.

For decades before closing its doors to the public 70 years ago, Steinert Hall was a crown jewel in the city’s performing-arts firmament, an acoustically impeccable space far removed from street noise and other distractions. In 1942, in the wake of the Cocoanut Grove nightclub fire, the subterranean theater became subject to stricter fire codes. Many buildings in Boston were either shuttered or forced to invest in expensive upgrades following the tragedy that claimed 492 lives.

Steinert Hall, located beneath the stretch of Boylston long known as “piano row,” across the street from Boston Common, joined the former group, never to reclaim its former glory. 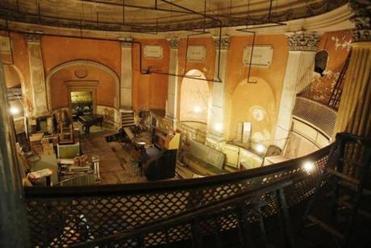 Since then, the hall has been used sporadically as a recording venue and tourist stop for visiting musicians; even Elton John dropped by sometime in the 1990s. Visitors are rare, though, and media exposure rarer still, one exception being a story on the hall posted earlier this month on the Emerson College radio website.

M. Steinert & Sons, the piano dealer that owns the building, discourages most inquiries about seeing the hall, citing safety concerns. A freight elevator used to transport instruments and other materials to the stage below was shut down earlier this year, also because of code revisions, making access even more difficult.

A Globe reporter and photographer allowed to tour the space Thursday could readily see why guests are discouraged, even as memories of the hall in its heyday have faded into quasi-obscurity.

The main floor and balcony are buried in stacks of old piano components, filing cabinets, furniture, bookshelves, shipping crates, and other bric-a-brac. Peeling paint and rusting ironwork attest to the floods that have plagued the underground hall for decades.

Plaster walls are pockmarked with holes. Sprinkler pipes installed in later years crisscross the hall’s vaulted ceiling, robbing from its architectural flourishes. Even as a storage area, Steinert Hall is something of a cluttered mess.

“It’s where old pianos come to die,” said building manager Colman McDonagh with a weary smile as he stepped around assorted obstacles while conducting the tour.

Yet there is much fading grandeur to take in, too, visual reminders of what a magnificent space Steinert Hall must have been, tucked 35 feet below one of the city’s busiest thoroughfares, when Boston was burnishing its credentials as a world-class city for live music.

Structurally, the elliptically shaped concert hall remains surprisingly intact, its fluted Corinthian pilasters separating what were once proscenium boxes reserved for well-heeled patrons. On either side of the small stage, at balcony level, wall panels bear the names of Schumann, Beethoven, Haydn, Bach, Mozart, and Schubert.

The 650 seats are long gone, donated years ago to Boston College High School. Still visible in the floorboards, though, are ventilation holes where heat was once pumped from a massive fan. Other touches, like an original leather-faced door and 1915 Greek-themed wall mural, possibly painted by muralist Charles Avery Aiken (it’s signed “C.A. Aiken”), have been preserved as well.

Commissioned by Andrew Steinert and designed by architects Winslow and Wetherell, the six-story, limestone-and-brick façade building at 162 Boylston St. that contains Steinert Hall was finished in 1896. The hall itself opened that December, with a concert attended by “an audience distinguished for its wealth, social standing and artistic reputation,” according to one newspaper account.

Within a span of five years, Steinert Hall would be joined by Jordan Hall, Symphony Hall, and Chickering Hall on Huntington Avenue, another recital venue built by (and for) a piano company.

As late as 1911, the hall was considered the “headquarters for the musical and artistic world of cultured Boston,” according to Alfred Dolge’s book “Pianos and their Makers, v.2.” Among the luminaries who performed there were pianists Ignacy Jan Paderewski, Harold Bauer, Josef Lhevinne, and Josef Hofmann, along with vocalists Maria Jeritza, Mary Garden, and Toti Dal Monte.

Even then, according to Paul Murphy, president of M. Steinert & Sons, the hall suffered from being built so far underground — and below the water table. Water main breaks in the area caused leaks and flooding that damaged the hall’s interior. During construction of the Boston Common Garage in the 1960s, a pipe break caused major flooding in the empty hall. To this day, it is plagued by smaller leaks trickling down from the sidewalk above.

At one point, Murphy recalls, Steinert Hall was designated for use as a public bomb shelter and stocked with supplies, including Geiger counters for measuring radiation levels.

While Murphy has fielded interest from many parties, including a Shakespearean acting troupe and nightclub owners, no deal to restore the space has been struck so far. He guesses one won’t be happening anytime soon, either.

“Pragmatically, it would have to be a labor of love, because a lot of the money you’d need to invest wouldn’t be coming back,” he says, estimating restoration costs at $6 million or more. “If you think about artistic people, how would it pay? It can be done, but it’s way back on my to-do list.”

Pianist Janice Weber first saw the hall in the mid-1980s, when asked to accompany a flutist who was recording there. “There were rumors around town that it existed, but not many had seen it, ” Weber remembers.

She also recalls the recording sessions being complicated by having to work late at night, when noise from the nearby MBTA Green Line was minimal. Standing inside the hall Thursday, one could hear little beside total silence. That’s rare in downtown Boston, at street level or way below.

Michael Lewin, for one, would like to see Steinert Hall’s resurrection.

“Boston has so much great music but a dearth of great concert spaces other than Symphony Hall and Jordan Hall,” he says. “The city really needs a great recital hall, and at one point Steinert was it. The bones of a great recital hall are still there, still fantastic. The question is, how do you salvage it?”