LAWRENCE - State education officials tapped a 40-year-old administrator yesterday who has played an instrumental role in turning around several Boston schools to lead the Lawrence public schools, in hope he can reverse years of chronically low achievement.

Jeffrey Riley was chosen less than two months after the state Board of Elementary and Secondary Education voted to place the ailing Lawrence system in receivership, the first time the board has ever fully taken over a school district’s finances and academic programs.

As receiver of the 13,000-student system, Riley will control the school budget and have broad latitude to shake up staff. The School Committee will be relegated to an advisory role.

Riley begins his duties Tuesday and will report directly to the state’s commissioner of elementary and secondary education, Mitchell Chester. Riley stressed at a press conference yesterday that he would work in collaboration with the Lawrence community as he develops and executes his turnaround plan.

“The reforms that lie ahead won’t be painless,’’ said Riley, speaking before dozens of city politicians and educators in the auditorium of South Lawrence East Educational Complex. “Lawrence needs bold change.’’ 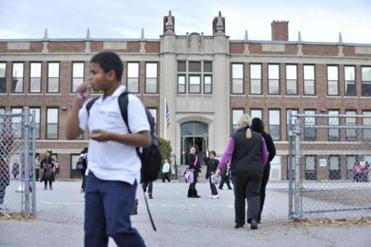 11/29: Lawrence schools taken over by state

The education board’s decision addresses years of academic failure in the district and marks the first time the state has fully seized the reins of a local school system.

Chester said Riley’s extensive experience in urban school systems made him an ideal choice. Riley started his teaching career in Baltimore, as part of the Teach for America program.

“I couldn’t be more pleased,’’ Chester said. “He’s had enormous experience and enormous success in working in inner-city environments.’’

His stock in the Boston schools rose sharply as principal of the Edwards Middle School in Charlestown between 2007 and 2009, when he transformed a school on the brink of closing into one of the city’s academic superstars.

Riley reinvigorated the Edwards by lengthening the school day, providing students with more time for the arts and athletics, as well as academics, and training teachers on how to use data such as test scores to tailor instruction to meet specific needs of their students.

He also created “acceleration academies,’’ weeklong academic boot camps that took place over school vacations for academically struggling students. That effort proved so successful that Riley later replicated the program at other low-achieving Boston schools after he became an academic superintendent supervising 28 elementary and K-8 schools. The program proved to be a boon for students still learning to speak English.

“We absolutely hate to see him leave Boston, but this is also an extraordinary opportunity for him.’’ said Carol R. Johnson, superintendent of the Boston schools. “For years, he has helped us turn around a lot of schools like the Edwards with a lot of energy and passion. . . . The children of Lawrence are extremely fortunate, and so are their families and staff members.’’

Over his 20-year career, Riley also worked as an administrator at Madison Park Technical Vocational High School in Roxbury, as principal of Tyngsborough Middle School, and as an adjustment counselor at Brockton High School.

He faces an enormous task in trying to put the Lawrence’s 28 schools on the right academic path. The city has among the highest levels of poverty in the state, and three-quarters of students are not native speakers of English. Some 90 percent of students are Latino, more than any district in the state.

The state has declared five Lawrence schools to be underperforming. Across the system, scores on state standardized tests rank in the bottom 1 percent in the state, and less than half of students graduate from high school in four years, the lowest rate in the state.

The grim reality prompted the board in November to cast its historic vote, a move strongly urged by Lawrence’s mayor, William Lantigua, after the state released a scathing report on the status of the ailing school system.

During his remarks, , Riley said he is planning to start his tenure in Lawrence with an open mind. He said he would spend the first few months getting to know the schools, the people, and the community as he develops a turnaround plan.

Riley said he would love to complete the turnaround in three years, but acknowledged it could take much longer. “School turnaround won’t happen over night,’’ said Riley, who will make $198,900 annually.

In making the appointment, Chester attempted to put teachers at ease, promising no mass firings.

Riley said in an interview that he has not decided whether he will move to Lawrence. He currently resides in Boston, where his two young children attend public schools. He said his decision to leave the Boston schools was difficult, but said the job in Lawrence was “an amazing opportunity I couldn’t pass up.’’

Riley’s appointment was well received by some key Lawrence officials, including Frank Moran, president of the Lawrence City Council, who initially opposed the idea of putting the school system into state receivership.

“He can count on me and the rest of the City Council,’’ Moran said in an interview, after shaking Riley’s hand and pledging his support.

Frank McLaughlin, president of the Lawrence teachers union, also attended the press conference and said he, too, was looking forward to working with Riley.

McLaughlin said he has heard many good things about him. “It’s a new day in Lawrence,’’ he said. “I’m happy to be part of it.’’

James Vaznis can be reached at jvavnis@globe.com
Loading comments...
Most Popular in metro
Real journalists. Real journalism. Subscribe to The Boston Globe today.