ORLANDO — Since the early days of the investigation into the Boston Marathon bombings, FBI agents have quietly scrutinized Ibragim Todashev, a professional mixed martial arts fighter with a violent ­record and a friendship with alleged bomber Tamerlan ­Tsarnaev.

But the scrutiny ended in bloodshed in an apartment complex near Universal Studios early Tuesday morning, where Todashev was shot and killed by an FBI agent ­after he allegedly attacked the agent in the middle of an interrogation.

During the questioning, ­Todashev acknowledged a role in an unsolved triple murder in Waltham, a brutal crime that law enforcement officials now suspect may also have involved Tsarnaev, said several officials with knowledge of the encounter. The interview with Todashev became heated and he lunged at the interrogator with a blade, the officials said. The FBI agent sustained “nonlife-threatening injuries,’’ the bureau said in a statement.

The bizarre turn capped weeks of investigator focus on Todashev, a Chechen native who lived until recently in ­Allston and Cambridge, since the April 15 bombing that killed three and wounded more than 260.

Friends of Todashev told the Orlando Sentinel that the 27-year-old had been questioned repeatedly by the FBI before the fatal encounter. 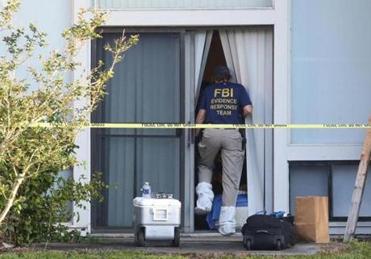 In Massachusetts, meanwhile, a resident of the two-unit house on Gordon Street in ­Allston where Todashev once lived said FBI agents came looking for him three days after Tsarnaev died in an April 19 shoot-out with police in Watertown.

Paige Steinberg, who lives in the first-floor apartment, said the agents showed her his picture.

“ ‘Have you seen him? Do you know if he lived here?’ ” she remembered them asking. The agents would come by again several more times in the next week, once asking her to look through the mail for any letters addressed to him.

Todashev, who was in the United States legally after receiv­ing asylum in 2008, had a reputation as a hothead and two weeks ago was arrested at gunpoint in Orlando and charged with a vicious assault that left the victim unconscious, with loose teeth and lying in a pool of blood.

Fighting was his passion: The 155-pound lightweight mixed martial arts combatant won his first professional fight last year with a combination of Russian Sambo martial arts techniques and a “guillotine” chokehold that subdued his ­opponent.

But a Russian news site quoted Todashev’s father, ­Abdulbaki, as saying he did not believe his son could have ­attacked law officers.

In a YouTube video sourced to RT.com, a news site that ­reports on global news from the Russian point of view, a speaker identified as Abdulbaki ­Todashev says that Ibragim also could not have been involved in the Marathon bombings ­because he was in the hospital, recuperating from knee surgery. “If he is not provoked, he is very calm and would never attack anyone,” he said in Russian.

Todashev is not considered a suspect in the Marathon bombings.

The Waltham slayings, carried out on the 10th anniversary of the 9/11 attacks — Sept. 11, 2011 — became a key focus for investigators, raising the possibility that Tsarnaev had turned to killing a year and a half before the Marathon bombings and opening the possibility that the attack could have been prevented if the case had been solved.

The slayings were shocking for their brutality and for the desecration of the corpses: The victims’ throats were slashed and the killers sprinkled marijuana over the bodies. Though some suspected the crime was drug-related, the perpetrator or perpetrators left behind thousands of dollars in cash.

Norman S. Zalkind, a veteran criminal defense attorney, said the bizarre nature of the triple homicide did not fit the pattern of most drug-related murders.

“In my experience, this is not the way it happens in drug deals,” Zalkind said. “It’s not this weird stuff. It’s shooting, and it’s over.”

Instead, the brutal slaughter of three fit young men on a day fraught with symbolism to ­Islamic extremists has prompted families of the victims to contact prosecutors recently about the possibility that ­Tsarnaev was involved.

Tsarnaev, a championship amateur boxer, considered himself “best friends” with one of the victims, Brendan H. Mess, but he did not attend Mess’s ­funeral. In early 2012, Tsarnaev went to his native Russia for six months while, around the same time, Todashev relocated to Florida.

Since the bombings and the slaying of MIT police Officer Sean Collier three days later, the Middlesex district attorney’s office has begun investigating whether Tsarnaev and his younger brother and alleged coconspirator Dzhokhar ­Tsarnaev, in custody and facing a possible death penalty in the bombings, could have been ­involved in the homicides.

Law enforcement agencies are also investigating whether the handgun Tamerlan ­Tsarnaev allegedly used in the fatal shooting of Collier and in the frenzied shoot-out with ­police early the next morning was acquired from one of the three men killed in Waltham, according to several people with knowledge of the investigation who spoke with the Globe on condition of anonymity because the killer could still be at large.

The federal Bureau of ­Alcohol, Tobacco, Firearms, and Explosives has been told by at least one person that ­Tsarnaev’s handgun may have come from the apartment on 12 Harding Ave. where the three men were killed, said one of the people who spoke to the Globe.

One of the three victims, ­Erik H. Weissman, may have ­resorted to selling guns because he had forfeited cash and a stash of drugs when his apartment in Roslindale was raided earlier in the year, said a second person who spoke with the Globe. “These guys looked pretty innocent, but they were pretty deep in it,” said one acquaintance of the victims who spoke to the Globe.

The shooting of Todashev in Florida Tuesday paralyzed the Windhover Condominiums, a set of two-story homes that surround a small pond. The complex sits just feet from the entrance of Universal Studios, down a quiet side street now captive to police barricades and television news vans.

FBI investigators have set up a white tent, surrounded by white and brown tarps, and evidence recovery teams have spent the day coming and going. Residents of the condo complex spent much of Tuesday outside as light rain trickled on a humid Orlando day.

“The guys at work aren’t going to believe this,” said one resident, as he pulled out of the complex around 6 p.m., wearing a Dominos Pizza uniform. “Never seen that guy before, but he lived two units away. Used to bum cigarettes off my wife.”

The man identified in the Russian news video as ­Todashev’s father, Abdulbaki, said that Tamerlan Tsarnaev and Ibragim Todashev were ­casual acquaintances who “just went to the gym together.” The video shows a picture of a man in a suit, with a caption that says the father is in Grozny, the capital of Chechnya, the semiautonomous region of southern Russia that is Todashev’s and the Tsarnaevs’ ancestral homeland.

Abdulbaki said that when Ibragim finished high school in Grozny, he asked his father to be allowed to go to the United States to study. “He said he liked it, can I stay here?” he said. “He said, I’ll come back in a couple of years.”

Todashev came to America from Russia several years ago to study on a J-1 visa, a program designed to promote cultural exchange by granting foreigners temporary permission to study or work in the United States, said law enforcement ­officials with direct knowledge of the information.

In 2008, the US government granted Todashev asylum, a protection granted to foreigners with a credible fear for their safety in their homelands ­because of religious, political, or other specific forms of persecution.

Todashev then obtained a green card in February 2013, making him a legal permanent resident and clearing the way for him to apply for US citizenship in a few years if he ­remained in good standing, said law enforcement officials with direct knowledge of the ­information.

Immigration and Customs Enforcement arrested ­Todashev’s girlfriend, Tatiana Gruzdeva, May 16 on immigration violations, said a law enforce­ment official. An ICE spokesman confirmed that she is in custody.

The dates Todashev was living in the Boston area were not ­entirely clear Tuesday. He was listed as living on Harding Street in Cambridge in a 2010 Boston police report, when he was arrested following an altercation after a traffic accident on Tremont Street in downtown Boston.

Todashev was issued a Florida driver’s license in March 2012, listing his address as 4502 Saint Georgas Court in Kissimmee.

In Florida Tuesday, two Massachusetts State Police troopers also participated in the questioning “in connection with the Boston Marathon bombing ­investigation” at the time of the fatal shooting, the FBI said.