FALL RIVER — When Odin L. Lloyd climbed into a Nissan Altima with three other people on June 17, 2013, the man he knew best, the only man he called a friend, was Aaron Hernandez, then a tight end with the New England Patriots, a prosecutor said Thursday.

And the person with the strongest motive to kill Lloyd was Hernandez, Bristol Assistant District Attorney Patrick Bomberg told the jury on the first day of Hernandez’s eagerly anticipated murder trial.

But Hernandez’s defense attorneys argued that Lloyd was Hernandez’s party pal, his “blunt master,” the man who hooked him up with marijuana and was always up for a night of picking up women.

Why would Hernandez kill a friend and jeopardize a career with the New England Patriots that was just taking off, asked Michael Fee, one of the defense lawyers. 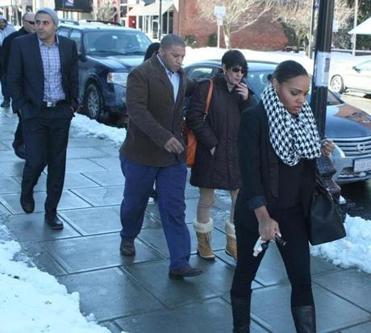 Who’s who in Hernandez case

The former New England Patriots tight end has pleaded not guilty to first-degree murder in the killing of Odin L. Lloyd.

Opening statements in the first-degree murder case against the 25-year-old Hernandez focused heavily on the relationship between the defendant and Lloyd, a semiprofessional football player whose bullet-ridden body was discovered by a teenage jogger.

The story of Hernandez, a wealthy professional athlete who was a star during the Patriots last Super Bowl appearance three years ago, has generated headlines nationwide. Now confined in a Bristol County jail, Hernandez is a world away from the hoopla surrounding his former teammates as they prepare to play in Sunday’s Super Bowl.

Prosecutors also laid out the physical evidence Thursday that they say proves Hernandez’s guilt: footprints at the crime scene; DNA on a shell casing found in the Altima that matches Hernandez; surveillance footage of Hernandez behind the wheel.

In his opening statement, Bomberg showed a photo of a smiling Lloyd, who worked at a lawn and tree-care company company in Norwood and was in a blossoming relationship with Shaneah Jenkins, the sister of Hernandez’s fiancée, Shayanna.

Bomberg later juxtaposed that image with a picture of Lloyd lying dead in an industrial park in North Attleborough, his body riddled with bullets. Lloyd was shot about 3 a.m., the day after Father’s Day.

Shaneah Jenkins and Lloyd’s mother, Ursula Ward, who sat next to each other in the front row of the courtroom, wept openly when the photo was shown. Ward cried again when pictures of her son’s body were shown to the jury during the testimony of 17-year-old Matthew Kent. He was the high school freshman who, while jogging home from the gym, found Lloyd’s body. Lloyd was discovered on his back, about 14 hours after police said he was shot.

The defense did not dispute that Hernandez was present with two other men at the industrial park the night Lloyd was killed.

But, Fee told the jury that prosecutors do not have any direct evidence that Hernandez pulled the trigger, or even wanted Lloyd dead. Prosecutors said a .45-caliber Glock was the murder weapon, but police have never recovered the firearm.

After the opening statements, Superior Court Judge E. Susan Garsh, who is presiding, told jurors that prosecutors do not have to prove Hernandez pulled the trigger to secure a murder conviction. Rather, they must show that he “knowingly participated” in the slaying and intended to bring it to fruition, she said.

In the scenario the prosecution laid out for jurors, Carlos Ortiz and Ernest Wallace, associates of Hernandez who also were in the car that night and also have been charged with murder, were willing participants in a plan hatched by Hernandez. Wallace was described as Hernandez’s “right-hand man.”

The prosecutor revealed little about a motive in the case. But he did say that when Hernandez and Lloyd were at a Boston nightclub a couple evenings before the slaying, Lloyd saw some of his friends there and Hernandez left the establishment angry, even though he exchanged no words with those friends of Lloyd.

The prosecutor said a valet saw Hernandez standing that night outside a downtown Boston hotel, shoving a gun into the waistband of his pants and then covering the gun with his jacket before leaving the area with Lloyd.

The next day, Hernandez texted Ortiz and Wallace, who were in Connecticut, and asked them to drive to Massachusetts.

Late on June 16, before he met up with Wallace and Ortiz to pick up Lloyd early the next morning, Hernandez and his fiancée went to a Providence restaurant with friends.

Bomberg said the jury would hear that Hernandez later told people he could not have been at the industrial park where Lloyd was killed because he was in Providence. But surveillance footage will show otherwise, Bomberg said.

After Bomberg finished his opening, Fee showed jurors a photo of Hernandez at the restaurant in Providence that night. It was taken a couple hours before the killing. In it, Hernandez is grinning. His arm is slung around Shayanna Jenkins.

Testimony is scheduled to continue Friday. According to a court official, Shaneah Jenkins and Ward, Lloyd’s mother, are slated to testify.