FALL RIVER — In a stunning reversal of fortune for a man who once sprinted into end zones as a National Football League star, Aaron Hernandez was convicted Wednesday of first-degree murder in the shooting death of Odin L. Lloyd, who prosecutors said made the fatal error of angering the former New England Patriots tight end at a club two nights before the killing.

Hernandez, 25, was sentenced to a mandatory life term without the possibility of parole. He stood expressionless in Bristol Superior Court as the jury forewoman pronounced him guilty, and he later sat down and shook his head.

The verdict came on the seventh day of deliberations and provoked emotional responses from the families of Hernandez and Lloyd, who sat on opposite sides of the cramped courtroom.

Hernandez’s mother, Terri Hernandez, and his fiancee, Shayanna Jenkins, held one another and wept. Hernandez looked toward the women repeatedly, whispering “be strong.” 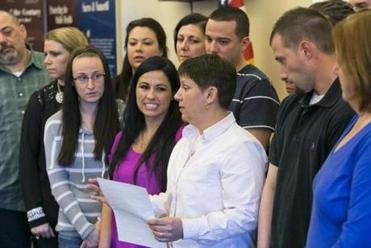 Jurors said they were surprised that lawyers for Aaron Hernandez said he was at the murder scene.

“Odin was my first, best gift I ever received,” Ward told Judge E. Susan Garsh during a brief sentencing hearing after Hernandez was convicted. “I thank God [for] every second and every day of my son’s life that I spent with him.”

She also offered words of forgiveness to Hernandez and his two alleged accomplices, who will be tried separately.

“I forgive the hands of the people who had a hand in my son’s murder, either before or after,” Ward said.

The verdict capped an 11-week trial that included testimony from 132 prosecution witnesses, including Patriots owner Robert Kraft; Shayanna Jenkins; and a former friend of the athlete who had claimed in a lawsuit that Hernandez shot him in the face in Florida four months before the execution-style slaying of Lloyd. The defense called only three witnesses.

On Wednesday, prosecutors praised jurors for looking past Hernandez’s status as a celebrated athlete once cheered at Gillette Stadium in Foxborough, the Patriots’ home field. After the verdict, he was taken to MCI Cedar Junction in Walpole, less than 2 miles from Gillette Stadium, where he will await permanent placement in the state’s prison system.

“Aaron Hernandez may have been a well-known New England Patriots football player,” District Attorney Thomas Quinn told reporters outside the courthouse. “However, in the end, the jury found that he was just a man who committed a brutal murder.”

Hernandez’s lawyers did not comment after the verdict, and at sentencing, defense attorney James Sultan said only that “we don’t have anything to add. Obviously the court needs to impose the statutory penalty” on the murder count.

The state’s highest court will automatically review Hernandez’s conviction, and he still faces a separate double-murder indictment in Suffolk County for allegedly gunning down two men, Daniel Abreu and Safiro Furtado, in Boston’s South End in a July 2012 drive-by shooting. No court date has been set in that case.

Speaking from his lawyer’s office Wednesday evening, the father of one of the Boston shooting victims said he wants to see his son’s alleged killer pay for his crimes.

In the Bristol County case that led to Wednesday’s conviction, prosecutors said Hernandez and two other men, Ernest Wallace and Carlos Ortiz, picked Lloyd up outside his Dorchester residence early on June 17, 2013, and drove him to an industrial park near Hernandez’s home in North Attleborough. There, prosecutors said, Hernandez shot Lloyd several times, including two kill shots to the chest as Lloyd writhed in pain on the ground.

The year before, Hernandez had signed a five-year, $40 million contract extension with the Patriots. He had helped lead the team to the Super Bowl.

Prosecutors never pinpointed his motive for killing Lloyd, but portrayed Hernandez as a young man who, despite his good looks, sizable fortune, and apparently bright future, was secretive, thin-skinned, and easily provoked by perceived slights.

Witnesses testified that Hernandez and Lloyd went to a Boston club two nights before the murder, and Hernandez appeared angry after Lloyd began talking with other people. Hernandez stormed out of the club and went back to his vehicle to retrieve a handgun, witnesses testified.

But the murder weapon was never found, and there was no eyewitness to testify. So prosecutors built a circumstantial case against Hernandez, weaving together surveillance footage, cellphone records, and DNA and other evidence found at the crime scene to tell the story of Lloyd’s final ride. The government also called witnesses who described a pattern of suspicious behavior by Hernandez before and after the slaying.

Shayanna Jenkins, who faces a perjury indictment tied to the case, was compelled to testify for prosecutors and said Hernandez told her to remove a box from the couple’s basement the day after the killing.

Authorities believe the box contained the .45 caliber Glock used to kill Lloyd, while defense attorneys said it may have held compressed packages of marijuana, based on Jenkins’s testimony about its smell and weight.

The defense also claimed the investigation was biased and incompetent from the start, as police fixated on Hernandez and declined to follow up on evidence pointing to other suspects.

In his closing argument, Sultan suggested that Wallace or Ortiz may have killed Lloyd in a drug-induced state, and that Hernandez could have taken the murder weapon from them when they returned to his home, to protect himself.

Sultan also conceded that Hernandez was at the scene, but maintained that he had only witnessed the slaying and was not part of a plan to kill Lloyd.

The defense had argued the evidence did not add up to guilt beyond a reasonable doubt. They said prosecutors failed to credibly explain why Hernandez wanted to kill Lloyd, describing the men as “future brothers-in-law” who dated sisters, pursued other women together, smoked marijuana, and socialized at family gatherings and nightclubs.

But on Wednesday, lead prosecutor William McCauley suggested that Lloyd, who rode a bicycle to his landscaping job, shared little in common with Hernandez.

“I think it was a great contrast between two young men,” McCauley said. “The defendant, who had so much — so much ability, talent, money, all the things that everyone thinks you need. And you had Odin Lloyd, who didn’t want that.”

Lloyd, McCauley said, “didn’t want [anything] given to him. He was going to earn it.”

Also Wednesday, the entire jury addressed reporters in an unusual news conference after rendering their verdict. One juror, Kelly Dorsey of Taunton, said the panel had not prejudged the high-profile case.

“You have to assume that the man sitting in that seat is innocent until the prosecution proves he’s guilty and that’s what happened today,” Dorsey said.

Lloyd’s sister, Olivia Thibou, expressed gratitude to the prosecution team but also said outside court that her family continues to grieve.