Both of Massachusetts’s Democratic senators on Friday condemned President Obama’s refusal to use the word “genocide” to describe the early-20th century Turkish massacre of an estimated 1.5 million Armenians.

During a ceremony commemorating the 100th anniversary of the atrocities, Senators Edward J. Markey and Elizabeth Warren both publicly faulted the leader of their own party, saying failure to label the events as genocide does not fully acknowledge the deaths and leaves the door open to other mass killings.

“We know what happened. We should not be afraid to say it,” said Markey, noting that Pope Francis and both the German and Austrian governments had used the term “genocide.”

“Our president should call it a genocide,” Markey said, winning sustained applause from the several hundred people gathered at the city’s Armenian Heritage Park on the Rose Kennedy Greenway.

Warren did not mention Obama by name, but, in remarks briefer than Markey’s, said, “If we do not recognize the horrors of the past, we risk seeing them repeated.” 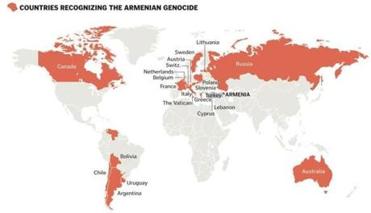 Map: Where the Armenian genocide is recognized

A look at the countries that acknowledge the 1915 genocide.

Later, in an exchange with reporters, Warren said that her message to Obama about the issue would be: “Tell the truth.”

“The Armenian people just want the truth acknowledged,” Warren said. “And if we’re not willing to tell the truth, then we really do run the risk that this will happen again in other places around the world.”

Massachusetts has one of the highest concentrations of Armenian-Americans in the country, about 30,000, and the use of the word “genocide’’ is of great importance in that community to describe the mass killings. Turkish leaders targeted the Christian Armenian population under the pretext that they would cooperate with the Russian enemy after World War I broke out.

As a presidential candidate in 2008, Obama pledged to use the term “genocide” to describe the Ottoman government’s efforts to cleanse their empire of Armenians. But since taking office, Obama has adhered to presidential precedent and shied away from using the word.

The choice of words to describe the massacre is fraught with geopolitical overtones, because Turkey is a US partner in NATO and key ally in several Mideast hot spots. The Turkish government objects strongly to the use of the term “genocide” and disputes the widely accepted estimate of 1.5 million deaths.

Armenian-American groups have criticized Obama’s reluctance, calling it particularly galling because he criticized his predecessor, President George W. Bush for similarly refraining from using the word.

On Friday, Markey and Warren threw in squarely with Obama’s critics on the issue.

“It’s important for us to have the strongest possible moral leadership, and I think a recognition of the genocide that occurred 100 years ago helps us today to have the moral leadership to rally the world to protect against millions — in our lifetimes — being slaughtered in the name of religion,” Markey told reporters after the ceremony.

“This is an area where he said that it was important to recognize the genocide, and I think it is, and I think the time has come,” added Markey, who said he had not “personally” conveyed his concerns to Obama.

The unusually pointed criticism of a president from the leader’s own party came at the end of a week in which Warren has also slammed the Trans-Pacific Partnership trade agreement that Obama is pushing. Obama responded, telling MSNBC on Tuesday that Warren was “wrong” about the trade deal.

White House officials declined Friday afternoon to respond directly to either senator’s criticism, instead pointing to an Obama statement issued via e-mail on Thursday.

“I have consistently stated my own view of what occurred in 1915, and my view has not changed,” Obama said. “A full, frank, and just acknowledgement of the facts is in all our interests.”

But the strongest language the president used to describe the events came in calling it “the first mass atrocity of the 20th century.’’

Pressed during Thursday’s White House briefing about Obama’s decision not to name the atrocities as a genocide, press secretary Josh Earnest said, according to an official transcript, “The president has spoken forcefully about the value and importance of acknowledging that particular tragic incident in history. And the president has spoken to that repeatedly.”

Obama and Warren have clashed before, but friction between the president and Markey is less common. In June 2013, as Markey ran against Republican Gabriel Gomez, Obama raised money for Markey and headlined a campaign rally at the Reggie Lewis Track and Athletic Center in Roxbury, where he urged, “I need Ed Markey in the United States Senate.”

That speech was quickly turned into a Markey television advertisement that featured significantly more footage of the president than of Markey himself.

But both senators owe a political debt to the president. In 2012, Warren beat then-Senator Scott P. Brown by less than 8 percentage points in Massachusetts. On the same night and on the same ballot, Obama beat former Massachusetts governor Mitt Romney by 23 points in the state, suggesting the president’s popularity helped Warren’s election.

The Greenway event, one of several scheduled around the city for the centennial, was attended by three people described by organizers as survivors of the mass killings, which took place between 1915 and 1923.

Governor Charlie Baker, at an earlier State House ceremony, used the word genocide, saying he was “proud that our state continues to stand firm on this issue.’’