In a stunning reversal, prosecutors Monday dropped criminal charges against Aisling Brady McCarthy, the nanny accused of murdering a Cambridge infant in her care in 2013, after the medical examiner’s office said it could no longer stand by its ruling that the child’s death was a homicide.

The revised ruling, which followed a lengthy and highly unusual review of the shaken-baby case, found that 1-year-old Rehma Sabir’s medical history “could have made her prone to easy bleeding with relatively minor trauma,” raising serious doubts that the child was a victim of abusive head trauma.

“I believe that enough evidence has been presented to raise the possibility that the bleeding could have been related to an accidental injury in a child with a bleeding risk or possibly could have even been a result of an undefined natural disease,” medical examiner Katherine Lindstrom wrote.

The ruling marked the second time in less than a year the medical examiner’s office had changed its stance on a shaken-baby case. It made McCarthy, a 37-year-old native of Ireland who has steadfastly maintained her innocence, a free woman.

“Miss McCarthy was put in jail for 2½ years over a crime that never occurred,” said McCarthy’s lawyer, Melinda Thompson. “Not just a crime that she did not commit, but a crime that did not occur. The life of an innocent woman was ruined.” 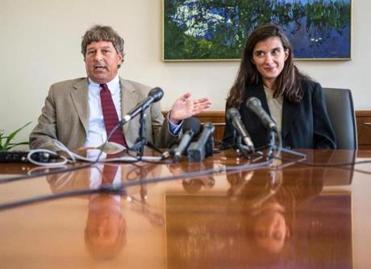 The former nanny, once accused of shaking a baby to death, is owed some dignity on her way back to Ireland.

At an afternoon news conference, Thompson said McCarthy “pretty much can’t stop crying out of joy” over the news and hopes to return to Ireland soon. She has been living in the United States illegally since 2002.

“She’s relieved, scared, and absolutely thankful” to the medical examiner’s office, she said. Thompson described the prosecution’s handling of the case and the charges against McCarthy as “a complete disgrace.”

“I think there was a rush to judgment,” she said.

McCarthy, a Quincy resident, did not attend the news conference, and Thompson said she was not available for comment Monday night.

The child’s parents, Sameer Sabir and Nada Siddiqui, also could not be reached for comment.

In Ireland, where the case has received intense media attention, news that McCarthy was no longer on trial brought rejoicing.

“It’s fantastic news, just fantastic news,” said the Rev. Kevin Fay, a priest from McCarthy’s hometown, Lavey, in County Cavan. “We all know the family very well. There’s a sense of great relief for everybody.”

The accusation that a nanny caused the death of an infant in her care generated widespread shock and prompted outrage on both sides of the Atlantic.

Prosecutors had alleged that McCarthy had assaulted Rehma on Jan. 14, 2013, causing massive brain injuries. Alice Newton, a specialist who determined that the child died of abusive head trauma, concluded the injuries could not have been inflicted before that day.

‘Miss McCarthy was put in jail for 2½ years over a crime that never occurred . . . The life of an innocent woman was ruined.’

Tests found that the infant suffered from extensive bleeding in her brain and behind her eye, acute injuries that specialists said led directly to her death. There was “no other medical explanation for Rehma’s injuries or death,” Newton wrote.

But McCarthy’s defense team, tapping into growing doubts about the science behind shaken-baby cases, submitted reports from a range of specialists challenging the cause of death. They asserted that the baby had been sick much of her short life, suffering from a bleeding disorder and gastrointestinal problems, and that she sustained bone fractures weeks before her death, when she had no contact with McCarthy.

In April, the medical examiner’s office said it was conducting a comprehensive review to determine whether the child was intentionally harmed, and prosecutors said they did not want to proceed to trial until it was complete. A short time later, McCarthy was released on bail to home confinement.

Only months before, prosecutors dropped murder charges against a Malden man when the medical examiner’s office changed its ruling that his 6-month-old son had died from head injuries caused by shaking, saying the cause of death could not be determined.

Newton, the specialist who determined that the Malden child died of abusive head trauma, defended her initial diagnosis in the Sabir case, despite the medical examiner’s shift.

“I stand by my comments in court,” said Newton, now the head of the child protection team at Massachusetts General Hospital.

In a hearing in September 2014, Newton said Sabir sustained massive brain injuries that were consistent with a “violent shaking injury.”

A search conducted the day after Rehma died uncovered blood stains on a pillow and blanket in her crib and on discarded baby wipes, police said. Investigators also found that part of the wall beside the changing table had been broken off, damage consistent with “forceful contact” from the table corner.

But in its review, the medical examiner’s office noted that the girl’s overall health and past medical issues “raise the possibility that she had some type of disorder that was not able to be completely diagnosed prior to her death.”

“Given these uncertainties, I am no longer convinced that the subdural hemorrhage in this case could only have been caused by abusive/inflicted head trauma, and I can no longer rule the manner of death as a homicide,” Lindstrom wrote.

The office “could no longer opine to a reasonable degree of medical certainty that the injuries were inflicted,” she said.

Ryan said prosecutors pursued the case “based on the evidence we had” and dropped it after concluding they could not “meet its burden of proof.”

Gerry Leone, the then-Middlesex district attorney who initiated the case against McCarthy, said he did not know the details of prosecutors’ decision to drop the charges and declined further comment.

Stephen Weymouth, a Boston criminal defense attorney who has followed media coverage of the case, said the revised finding could be seen as an exoneration of McCarthy, especially since prosecutors spent nearly three years working on the case.

But, he added, it does not mean that McCarthy can never face murder charges again, because there is no statute of limitations for murder.

Also, prosecutors dropped charges before a jury was sworn, meaning that double jeopardy constitutional protections do not apply to McCarthy.

“She could conceivably be charged with, and prosecuted for, murder in the future if other evidence that can be utilized is found,” Weymouth said. “I think it’s highly unlikely.”

Robert Sege, a Boston pediatrician and a member of the American Academy of Pediatrics committee on child abuse and neglect, said shaken-baby syndrome remains a tragic cause of many baby deaths, and the legal dismissal of some cases should not undermine this point.

Thompson, meanwhile, said McCarthy could not rule out a lawsuit against the authorities for wrongful prosecution.

She said the detainer that federal immigration officials lodged against McCarthy remains in effect, keeping her confined in her home.

Thompson said McCarthy’s time in jail was “a complete nightmare” and said she hopes to return home to Ireland soon.

Hopefully, she said, US immigration officials will “use their discretion and let her get on a plane and go home as soon as possible.”