Luis Baez, 34, was driving under the name of Pedro Valentin in September when he picked up a woman in Boston and allegedly assaulted her, prosecutors said in a statement Tuesday night.

Baez was ordered held on $2,500 cash bail, and ordered to stay away from the victim and the Boston College campus, prosecutors said.

In a statement, an Uber spokeswoman said the ride-hailing company is cooperating with authorities.

“What’s been described is a horrible crime and we will continue to fully support law enforcement. Uber blocked this individual’s account as soon as we learned about this last year,” the statement said. 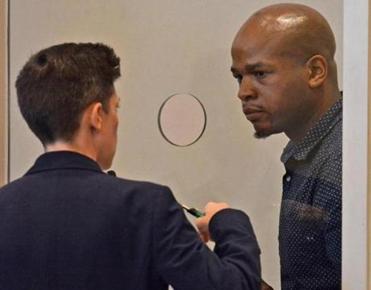 Judge Lisa Ann Grant released Michael Vedrine without bail and ordered him to stay away from his accuser.

On Sept. 29, Baez allegedly picked the woman up in Boston, but did not drive her to her requested destination. Instead, he drove her to another location, “where he proceeded to sexually assault her,” the statement said.

After the alleged assault, Baez drove the victim to the Boston College campus, where she reported the assault to campus police.

It is unclear if the woman attends Boston College.

Meghan Kelly, a spokeswoman for the DA’s office, said, “We do not release identifying information about victims.”

Kelly also would not comment on the timeline of the lengthy investigation.

“The investigation began when the incident was reported,” she said. “Part of that . . involved determining the identity of the driver . . . He was allegedly operating under a false ID.”

Boston College police and Boston police investigators were able to identify Baez through information about the victim’s ride request stored on the Uber app, the statement said.

Although the driver was using an assumed name, his identity was later determined to be Baez, “who is known to police,” the statement said.

The next court date is June 21.