The Boston Globe this week completes a move to new downtown headquarters, a practical and symbolic milestone in the ongoing evolution of an enterprise remaking itself for the digital era.

The Globe is leaving its antiquated building on Morrissey Boulevard, a red brick icon it first occupied in 1958, for two floors of a gleaming, contemporary office space at the corner of Congress and State streets. The address is 53 State St., but many tenants, including the Globe, choose the tonier moniker 1 Exchange Place, so named because the building once housed the Boston Stock Exchange.

The move will be completed Friday, when the bulk of the newsroom fills the downtown office, joining the advertising, tech, circulation, finance, and human resources departments that arrived over the past two weeks.

The Globe is among the last wave of major regional newspapers to give up cavernous space intended for a 20th-century manufacturing process, for a home tailored to a 21st-century digital business, said Rick Edmonds, media business analyst at the Poynter Institute. The Houston Chronicle has new offices. So do the Miami Herald, the Star Tribune, and the Atlanta Journal-Constitution. These have been “economizing moves,” Edmonds said, driven by changing technologies, smaller staffs, and declining revenue. 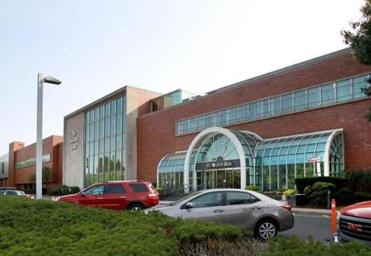 Game over on Morrissey Boulevard

Sports history wasn’t made in the Globe building, but it sure was covered here.

We’ll be the folks in khakis.

It is a homecoming for the Globe of sorts, back to the old neighborhood where the paper opened its Washington Street office in the 19th century. But the move is not about an attachment to the past — it is the long-coming completion of a break from it.

Like the rest of the newspaper industry, the Globe is evolving from a print-only business dependent on advertising to a digital-minded media company heavily supported by subscribers. The Globe launched its first website, boston.com, in 1995 and debuted its first pay site, bostonglobe.com, in 2011. The Globe will share its new space with STAT, a sister publication covering health and medicine.

“The Globe belongs downtown,” said Brian McGrory, the Globe’s editor. “Let there be no doubt whatsoever. Our reporters, editors, photographers, designers should be able to step out our front door and run into decision makers, business leaders, entrepreneurs, doctors, tourists, everyday workers trying to patch together a living.

“And the reality is, we’ve outlived our space,” McGrory said. “We’re the parents whose kids have all moved out and we’re banging around a big old three-quarters-empty Victorian. The industry changed beneath us. We’re doing every damn thing possible to address it.

“This move puts us in a state-of-the-art newsroom built for the Globe of today; one that is digital-minded, rather than what we were in years gone by.”

The new space is pristine, attractive, and fresh, with wide aisles, enormous windows, and employee amenities lacking at Morrissey Boulevard, such as a big modern kitchen, up-to-date workspaces and furniture, soundproof booths for sensitive phone calls, and plenty of space to just slap down a laptop and plug in. A “news hub” area is designed to be the nerve center of the newsroom, bringing together editors, writers, designers, and photo and graphic specialists, with an eye toward responding more efficiently to breaking stories.

Once we vacate Morrissey Boulevard, no longer will staffers bolt up with a yelp because they just saw a mouse. It was often funny, but the rundown, sepia-toned feel of the building presented a real detriment in recruiting and keeping talent, said Sean Keohan, the Globe’s chief operating officer.

Such a “very tired” workspace is a major turnoff for many younger, highly educated professionals recruited by the Globe, Keohan said.

“We’re fighting for talent,” Keohan said. And the competition is not just other media companies but nearly any business with a heavy Web presence that needs developers and other tech pros.

That’s why prerequisites for a new Globe headquarters included “a future-looking workspace” that maintained a sense of Globe history but reflected the newspaper’s inexorable march toward a digital operation, he said.

That is the space at the Exchange Place tower. Building out the space cost “a lot,” Keohan said, declining to give a number.

The paper’s business departments are on the tower’s second floor, accessed by elevators or a grand, “Gone With the Wind”-style staircase in the tower lobby.

One floor above, a bright and open space holds the newsroom. There are enough ceiling-mounted HD screens here to open a Las Vegas sports book, but they are there for a reason. Screens were tiny and at a premium in the old newsroom. Now, reporters and editors will be able to more easily keep an eye on breaking news events and the real-time analytics that show the readership of each story on the Globe’s websites. The new office also offers numerous conference rooms for story meetings — something else lacking in our old digs.

In a salute to history, the meeting rooms are named for key people along the Globe’s timeline, such as columnist Ellen Goodman and former publisher Chris Mayer. Artsy pictures from Globe photographers have been blown up and mounted on the walls, including the famous shot of Red Sox catcher Jason Varitek jamming his mitt into the mug of Yankee Alex Rodriguez. (Globe publisher John W. Henry is, of course, the principal owner of the Red Sox. It’s still a historic Boston photo, no?)

Doors and walls are inscribed with lump-in-the-throat quotes (for us, anyway) about journalism, such as:

“Freedom of the press is not just important to democracy, it is democracy.” — Walter Cronkite.

And the all-time great:

Christine Chinlund, managing editor for news, said she has noticed a new sense of energy and purpose from the staff members who have already relocated.

“I think we managed to take this space and make it into a newspaper,” Chinlund said.

The new office was designed by the architectural firm Gensler, which also designed the new newsroom at the Washington Post.

That is why so many interior doors and walls are glass.

Globe executives visited many other newsrooms while researching a move. The Washington Post’s new space made a strong impression. Tracy Grant, a Post editor who oversaw that paper’s move in late 2015, said a modern news office conveys intangible benefits to people working in an industry battered by cuts.

The Globe’s printing operation is well along in its move to a new plant in Taunton, and soon the Morrissey Boulevard site will be empty and sold for redevelopment. The building is being marketed at 815,000 square feet, on 16.5 acres. The new office space downtown is 75,000 square feet, and the Taunton facility is about 330,000, Keohan said. The paper will also maintain a small distribution center, likely in Newton, he said.

Two previous deals to sell Morrissey Boulevard have fallen through, but Keohan said, “We expect to be under agreement later this summer.”

A striking remnant of Globe history, rescued from the basement at Morrissey Boulevard, is on display in the lobby of the new office. It is a massive Linotype machine, repurposed as a Brutalist sculpture representing the golden era of newsprint. The Globe used Linotype technologies to set its type from 1894 to 1976 — from Grover Cleveland to disco.

A floor in the new office was reinforced to accommodate the installation. This artifact of the past works as a curiosity precisely because it is so foreign to what the Globe is now, and what it will be.

Mark Arsenault can be reached at mark.arsenault@globe.com.
Loading comments...
Most Popular in metro
Real journalists. Real journalism. Subscribe to The Boston Globe today.