NEW YORK — The guest of honor at the $350-a-plate Midtown gala rose early at The Plaza Hotel, bent on taking a clarifying walk through Central Park and enjoying breakfast beneath the chandelier in his sumptuous guest room.

The city as ever had electrified his senses, but his schedule had been packed — an appearance on Harry Connick Jr.’s TV show, dinners with old friends, publishing meetings to review the sales and book-tour plans for his forthcoming roman à clef — and by the third day the crowds, the noise, and a startling encounter with a hissing cat had jangled his nerves just a bit. He craved the comparative calm and greenery of his Cambridge home turf. Plus, he needed to run through his speech once more.

As if he could forget. One of his handlers, Jessica Kensky, had gently reminded him twice already that morning, and the other, Patrick Downes, suggested that his delivery still needed a little work. A thinner-skinned star might have snapped, but he loved these two, and he was a carefully trained professional. So he sat before them, his long-lashed brown eyes open wide with anticipation, his tail curled to the left behind him.

“Rescue, speak,” Jess said, clutching a treat in her hand as she prepared her service dog Thursday for his big moment at the ASPCA Humane Awards, where he was receiving 2017 Dog of the Year honors.

The 5-year-old black Lab barked twice, crisply. “Take a bow,” Jess added, and Rescue dipped his head to the floor and right back up, scarfing his reward — a Trader Joe’s beef liver treat — on the upswing. Laughing at his gusto, she cooed his name and wrapped him in a hug, bending nimbly on two prosthetic legs. 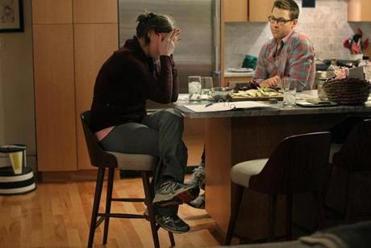 Bombing survivor debates whether to become a double-amputee

A Boston Marathon survivor’s journey as she debates whether to live with pain or become a double-amputee.

She had rarely laughed like that in the first five months after the 2013 Boston Marathon bombing — which blasted away her left leg below the knee, and Patrick’s, too, barely seven months after they got married — and she had not yet slept through the night. Then Rescue entered her life that September, and she did both the first day.

Those were the fringe benefits of a dog officially trained to fetch Jess’s cellphone, flip light switches, brace her in a fall, and manage other routine tasks that she had taken for granted as a 32-year-old oncology nurse and avid runner.

The years since then have been anything but steady, marked by so many surgeries and setbacks, infections and complications, even after Jess made the excruciating decision in January 2015 to amputate her ravaged right leg below the knee.

But even in the darkest moments, Rescue could still make her laugh, and his regular walks drew her out of bed. When she had applied to the service-dog organization NEADS just weeks after the bombing, she could picture her future companion pressing elevator buttons or fetching keys. But she never imagined the way Rescue’s fondness for belly rubs or exuberant eating style could lighten visits from family and friends on days she couldn’t bear to talk about her latest medical problem.

As Rescue’s public profile rose — with a growing Instagram account; a coming “Rescue and Jessica” children’s book, written by Jess and Patrick; and a scene-stealing turn in a 2016 HBO documentary on the bombing survivors — someone submitted his name when the ASPCA asked members nationwide to propose candidates for its annual awards.

Those honors celebrate “the deep and intimate connection” between animals and humans, said Matt Bershadker, ASPCA president and CEO, who called Rescue “the full package. He’s a companion, he’s a service dog, and he’s making her life — in ways that we never could’ve contemplated — just a little bit easier.”

Jess and Patrick didn’t even know Rescue had been nominated until Cathy Zemaitis, development director at NEADS, got a discreet call about his win over the summer, so the ASPCA could book the winners for the gala. And the ASPCA did not know what Jess had been keeping close to the vest — that for the first time since the bombing, she had finally strung together a few months without persistent pain or medical misfortune.

In June, after a surprising month of being able to stand at the kitchen sink, run errands, and take long walks without overwhelming pain, Jess told Patrick it was finally time to pack and leave Walter Reed National Military Medical Center, where they had lived since 2014, after receiving rare Pentagon approval for civilian admission. Better to leave now, she figured, before her luck reversed. Though she continues to worry, she has remained pain-free for half a year, steady enough to return this fall to work part time at Massachusetts General Hospital.

In New York, she scarcely used her wheelchair, except to scoot around her room at The Plaza when her prosthetics were off. On Thursday, she set an early alarm to give Rescue leisure time before he would need to be “on” for several hours at the gala.

‘Even though he’s related to the bombing, he doesn’t know that, and that’s the most beautiful thing.’

He remained sprawled across a cushy dog bed on the far side of the room until she signaled to him. “Hey, bud,” she said softly. As she carefully applied balm to the ends of her legs and secured her prosthetics, he waited attentively, knowing the command that would follow: “Rescue, let’s get dressed! Wanna go potty?”

With his collar and red “SERVICE DOG” vest on, he followed Jess down the hall to the elevator, reading her pace to stay a half-step behind her.

Outside, Jess removed Rescue’s vest, an “off the clock” move meaning he could set the pace, sniffing and meandering as he pleased. After entering Central Park, they rounded the pond with its picturesque stone bridge and climbed a gentle slope near the skating rink, steam rising from the ice. Rescue zigzagged, sniffing as he walked, nose in the grass.

On the way back, Rescue picked up the pace, knowing breakfast would follow. In the room, he scarfed down a cup and a half of dry kibble in a minute, and then they dressed for the gala. Rescue wore his red working vest, plus an argyle bow tie velcroed to his collar, rakishly askew.

Outside, a doorman in gold trim followed Rescue with their bags, and Rescue followed Jess to a waiting Suburban with tinted windows, spotting her from below as she scaled the running board, then jumping in after her. He lay his head gently across her lap for the 21-block ride to Cipriani 42nd Street, a vast, lavish function space in a preserved banking hall.

In two hours it would fill with 550 guests, among them former New York and Boston police commissioner Bill Bratton and many from the city’s philanthropic class.

Jess and Patrick stepped inside, their eyes taking in the dramatic expanse of the room, Rescue between them seeming to do the same. A clutch of staffers, many with clipboards, greeted them warmly.

Soon a couple of uniformed firefighters with aw-shucks South Carolina accents arrived with their formerly feral firehouse feline Flame, the 2017 Cat of the Year and an Instagram star, in a mesh backpack. Jess and Patrick had befriended the gang at the hotel and the Harry Connick taping, but a nose-to-nose meeting had ended abruptly when the cat hissed and Rescue skittered away. They tried again now and the same thing happened.

As the time for the gala neared, Jess refined the bullet-point notes for her speech, with help from Patrick and Zemaitis. They debated whether to call out the rise of service-dog fraud — people buying vests and ID cards online so they could bring untrained pets to restaurants and theaters — an ongoing campaign for NEADS. Zemaitis suggested they merely hint at it, while thanking the ASPCA instead for shining a spotlight on the trained, hard-working service dogs who help people with permanent disabilities.

Over the first hour and a half of the luncheon, Rescue lay under the table in obedient silence with his head peeking out from the tablecloth, watching passing feet and licking hidden flavors from the carpet.

Then it was their turn, called to the stage last, like Best Picture at the Oscars. The hall darkened, and they showed a four-minute film made for the occasion. Eyes glistened at the sight of Rescue comforting Jess in a hospital bed, and bringing her a blanket at home when she shivered on the couch, unable to easily get up without her prosthetics on.

As it played, Jess clutched Patrick’s left wrist, and Rescue nuzzled both of them, just out of sight to stage left.

“Have you ever seen a story that more acutely exemplifies the special bond between humans and animals . . . and the term ‘good dog’?” said veteran WNBC anchor Chuck Scarborough, the emcee, as the lights came on. “Ladies and gentlemen, please welcome the ASPCA Dog of the Year, Rescue, along with Jessica Kensky and Patrick Downes.”

With Patrick on one side and Rescue on the other, Jess led the dog through the tricks they had practiced at The Plaza. “Rescue just took a bow and he gave his speech, so I’m going to translate for you,” she said, proceeding to thank the ASPCA for the honor and the “posh accommodations” so close to his favorite spot in the city, Central Park, as well as the people of New York for sprinkling sidewalks with so many tasty “chicken bones, half-eaten pretzels, [and] falafel balls — we found them all.”

Eased by the laughter, she found her voice and described the profound sense of loss during the first months after the bombing. “We lost our apartment, we couldn’t fit our wheelchairs in our car, we couldn’t go to work, we couldn’t walk. All of our plans disappeared. And Rescue was the first gift that came back in our life. Even though he’s related to the bombing, he doesn’t know that, and that’s the most beautiful thing,” she said.

As she hit the three-minute mark in a four-minute speech, describing the meaningful but less public work that most service dogs perform, Rescue — seeing no immediate tasks at hand, no way to know how long she would talk — yawned, stretched, and sprawled on the floor of the stage. “He’s like, if there’s not a cookie involved here, I’m just gonna lay down. He has no idea this is all about him,” she said.

On a sold-out Acela back to Boston that evening, with no easy place to lie down lengthwise, Rescue settled down parallel to the seats, falling asleep the moment the wheels started to turn.

A loud noise woke Rescue in eastern Connecticut, and Jess curled up beside him on the floor, kissing him atop his nose. She poured him some water, propped a pillow under his chin, and they rested, each one supporting the other.