What happens when even ramen noodles are out of reach?

It’s a problem that elite colleges across the country are now confronting, as a significant share of students are unable to afford even basic staples and find themselves skipping meals.

Even at colleges that boast generous financial aid plans, some students are struggling to find sufficient nutritious food. As a result, food pantries, meal-plan sharing programs, and care-package deliveries have emerged on campuses including Dartmouth College, the Massachusetts Institute of Technology, and Emerson College.

At MIT, administrators were caught off guard last year when about 10 percent of students who responded to a student-life survey reported going to bed hungry at least once in the previous week, because they lacked money for food.

MIT has a $15 billion endowment, a commitment to meet students’ full financial needs, and an e-mail list-serve that alerts the campus to free leftovers. On the surface, it might seem hunger shouldn’t be a worry. 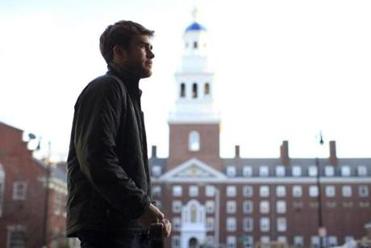 What is it like to be poor at an Ivy League school?

High-achieving, low-income students, often the first in their families to attend college, struggle to feel they belong on elite campuses.

“We were surprised,” said Suzy Nelson, vice president and dean of student life.

Hunger was once considered a problem isolated to community college and state school students, but estimates now suggest that anywhere from 10 to 20 percent of students at four-year colleges have struggled with enough to eat.

Chase Ybarra, 44, a senior at Emerson, is one such student. “There’s an illusion that to come to this institution you have to be wealthy,” he said. “No one wants to admit they’re hungry. It’s hard to talk about when other students are talking about how their parents went on a trip to Bali.”

Ybarra, who worked at a call center before returning to school and until recently relied on his partner for a place to live, shopped for his meals at a local food pantry last year and said he has learned to “go long periods without eating.”

Still, having a food pantry on campus is a big help, Ybarra said. He relied on Bunker Hill Community College’s pantry while he earned his associate’s degree there and is now advising Emerson officials on how to build up the school’s food bank.

The Emerson pantry, a nook of shelves on the second floor of an administration building, started last fall, funded by contributions from faculty, staff, and alumni. It’s packed with canned food, bread, macaroni and cheese, milk boxes, snacks, and toiletries, and it is available to students during office hours. The college opened the pantry after professors reported that some students’ grades were slipping because they couldn’t afford to eat, said Chris Daly, the college’s director of retention and student success.

“A lot of students can figure out how to finance their tuition,” Daly said. “But it’s these little costs. They are working two or three jobs and struggling with the ability to get consistent food.”

Most experts say that hunger is more acute among college students attending two-year institutions, with a recent study estimating that about 36 percent sometimes didn’t eat because they couldn’t afford it. Many of those campuses have long operated food pantries, and some are experimenting with giving students food vouchers and food scholarships.

The prevalence of food insecurity at private and four-year colleges is more difficult to measure, because not all schools have surveyed their students. The College and University Food Bank Alliance lists 582 member campuses, including Syracuse University, Georgetown University, and Cornell University.

“I don’t know of a college that doesn’t have this problem,” said Sara Goldrick-Rab, a higher education policy professor at Temple University who has studied food insecurity.

College costs have skyrocked, and financial aid doesn’t cover all the expenses, she said.

For example, the standardized financial aid forms that colleges use to assess need don’t consider what a family owes in debt. Students may have to work in college and use their financial aid to send money home to help their families pay bills, forcing them to cut back on meals, Goldrick-Rab said.

Incidental expenses, from the fees to join clubs to the cost of making photocopies, buying supplies, and putting deposits down for rent, may also cut into a student’s food budget.

“There are often expenses that a student faces that are reality for them, that the college doesn’t want to face,” she said. “It’s a miserable financial-aid system that doesn’t deliver for anybody right now, and this is the collateral damage.”

After MIT’s survey, the university in December launched a program called SwipeShare that allows students to donate meals to classmates. Students with unused guest meals available on their dining plan can submit them to a bank, and students who need food can request a meal be added to their own account. They can then swipe their own meal card for entry into the dining hall. So far, 900 meals have been donated to the program.

The school is also exploring the idea of opening a low-cost pantry and plans to hold food budgeting classes, Nelson said.

Additionally, a student-led group helped organize tote bags of donated food, including fruit, lentils, and canned goods, for 20 students who remained on the MIT campus during the January break, when dining hall operations were limited.

Food is “flowing everywhere when you don’t need it, but when you need it, it’s not anywhere,” said Bettina Arkhurst, a New Jersey senior studying mechanical engineering. Arkhurst arranged the January delivery after hearing from friends about the difficulties finding food during the break. She hopes to make it available in the summer, too, for students who are staying in the area because they are working or can’t afford to return home.

“Food is not something any student should have to worry about,” Arkhurst said.

But many still do.

Dartmouth provided 75 students with bags of groceries to tide them over during the January break.

Anna Del Castillo, 21, a senior from Mississippi, has used the Tufts meal-plan donations for the past two semesters. Del Castillo, who lives off campus and receives financial aid to cover most of her tuition and rent, said she scrimps on food.

She works part time to pay for some of her rent, books, and food. Every two weeks she goes to the grocery store to buy supplies so she can cook at home. She usually avoids meeting friends at the university dining halls, where a meal can cost $14, and suggests a coffee instead.

But the Tufts Swipe it Forward program has helped during the end of the semester, when she is too busy studying for a grocery run, and allowed her to eat with her friends in the dining hall occasionally.

“Going into a major cafeteria, it’s a big social space,” Del Castillo said, adding that she is glad she can feel part of the community there.

But students and administrators acknowledge that food pantries and shared meal-plan programs are emergency measures.

Tufts officials said they are looking at how to address the hidden expenses of college beyond tuition, room, board, and books.

MIT is studying where students have options to get food and wants to create a handbook for those on a tight budget, said Nelson, the student life dean.

Still, money is an inescapable barrier, and food pantries are just a signal of the shortcomings of college pricing, Goldrick-Rab said.

“This is a systematic problem,” she said. “The point is to go beyond the food pantry.”

Fernandes can be reached at deirdre.fernandes@globe.com.
Loading comments...
Most Popular in metro
Real journalists. Real journalism. Subscribe to The Boston Globe today.