Representative Joseph P. Kennedy III, the last member of the Democratic dynasty serving in Washington, plans to formally announce Saturday that he is launching a primary challenge to Senator Edward J. Markey, an audacious political move that could open fissures within the Democratic Party and reshape the Massachusetts political landscape.

Kennedy will make his announcement at a breakfast with supporters and local community members at East Boston Social Centers, according to two people close to him. From there, Kennedy will tour the state through Monday, highlighting issues he plans to center his campaign on, including health care access, mental health and addiction issues, climate change, and civil rights, the people said.

Kennedy informed Markey of his decision Wednesday, one of the people added.

“Elections are about choices, and Ed looks forward to spending the next 14 months campaigning hard every day to show the people of the Commonwealth why he’s the right choice,” John Walsh, Markey’s senior campaign adviser, said in a statement Wednesday.

Backed by his famous surname and relative youth, Kennedy, 38, will enter the race as the front-runner, according to recent polls. But Markey, 73, has insisted publicly and privately he will put up a tough fight to stay in Congress, where he began serving in 1976. 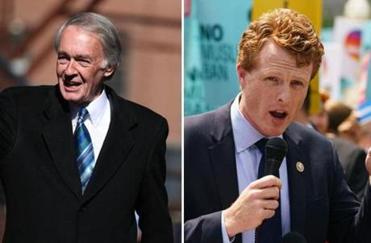 Kennedy is no insurgent, but his announcement will be the starting gun of a generational showdown in one of the most closely watched primary races in the country. Kennedy and Markey are separated more by age than ideology. They share largely similar progressive views on a range of issues and are well-respected in Massachusetts and Washington political circles.

“Joe plans to make a campaign announcement this Saturday in East Boston. He looks forward to speaking with folks then,” spokeswoman Emily Kaufman said.

The great-grandson of an ambassador, grand-nephew of a president, grandson of a senator, and son of a congressman, Kennedy will continue to be lifted by his family name, which the vast majority of Democratic primary voters see favorably, but he will have to carry the expectations and the outsized scrutiny that come with it.

Kennedy isn’t shying away from his pedigree: He chose East Boston to make the big announcement in part because it is where the Kennedy family landed when they came over from Ireland, the people close to him said. The neighborhood also illustrates the economic justice issues Kennedy intends to focus on in the campaign.

Another reason for the location: Kennedy’s wife, Lauren Birchfield Kennedy, has worked in the neighborhood through her child-care nonprofit.

Kennedy’s campaign appears to be assembling an experienced and diverse team. Among others, he has brought on Tracey Lewis, a longtime adviser to Representative Ayanna Pressley of Boston.

Markey has hinted that he will contrast his humble roots with Kennedy’s background of privilege. At the state Democratic Party’s annual convention last weekend, he described his upbringing as the son of a milkman “in a blue-collar neighborhood in Malden,” where he learned his values at the same kitchen table at which his mother “figured out how long we could keep the heater on during the cold winter nights.”

During his final year of law school, he launched his first campaign, a successful bid for the Massachusetts House of Representatives.

A race focused on biography is not without peril for either candidate. Kennedy will have to contend with charges that he was born clutching a silver spoon; Markey is vulnerable to being cast as a creature of Washington, where he has spent more than four decades of his political career. So strong are Markey’s ties to the Capitol that he has repeatedly faced accusations that his main residence is not the yellow two-story childhood home in Malden as he claims, but rather the much grander home he and his wife have owned in Chevy Chase, Md., since 1991.

Markey brings to the matchup a long legislative record fighting for liberal causes — including combating the spread of nuclear weapons, championing consumer protection, upgrading laws on technology, and advancing environmental protections — work that has earned him devotion from many Democratic activists in Massachusetts.

Most recently, he partnered with Representative Alexandria Ocasio-Cortez, a young progressive icon from New York, on legislation creating a Green New Deal to combat climate change and restructure the economy. As the threat from Kennedy emerged, Ocasio-Cortez endorsed Markey’s reelection bid. It’s among the numerous endorsements Markey has collected, including that of Warren.

But stacks of legislative accomplishments don’t carry the weight they once did. Desire for generational change is coursing through the Democratic base, and Markey, who has served in Congress longer than Kennedy’s been alive, has posted consistently soft poll numbers since entering the Senate in 2013.

The electorate’s mood and Markey’s perceived vulnerability, some strategists say, provides Kennedy a rare shot at higher office in a state that doesn’t offer many opportunities for advancement.

Kennedy’s decision is certain to roil Democratic circles in Massachusetts and beyond. High-level party officials publicly urged Kennedy not to get in the Senate race. They warned that his challenge would be an expensive distraction from the urgent 2020 tasks of ousting President Trump, winning control of the Senate, and keeping the House of Representatives in Democratic hands.

Other Democrats, however, welcome Kennedy’s bid, believing his knack for capturing public attention — which party leaders nodded to when they chose him to deliver the Democratic response to President Trump’s 2018 State of the Union — can help Democrats advance their agenda in an era of bitter polarization. A Senate seat would lend an even bigger national spotlight to those skills, they believe.

Kennedy’s decision to take on a respected colleague over the protests of party elders marks a hard break with the low-key profile he cut for much of his six-plus years in the House. Colleagues describe him as a dutiful, even humble, team player, focused on working the inside game and building a reputation on his own merit, not his last name.

Running against Markey shows that Kennedy possesses an ambitious streak reminiscent of the political paths of his great-uncles, President John F. Kennedy and Edward M. Kennedy, who challenged then-President Jimmy Carter for the Democratic presidential nomination in 1980.

Kennedy last weekend said he “respectfully” disagrees with the argument that a primary challenge by him would hurt the party. “I don’t see how an active, engaged race that enables an electorate across the state to make an informed decision about who’s going to represent them in the United States Senate for the next six years is a bad thing,” he told reporters. “That’s exactly what the process was designed to do.”

Kennedy’s expected announcement is already having a ripple effect in the Congressional district he represents. Jesse Mermell, a Democrat and former top Deval Patrick administration official, stepped down as president of the Alliance for Business Leadership on Wednesday, and intends to launch a campaign for the Fourth District seat, according to a person close to the Brookline resident.

For his part, in early 2012, Kennedy resigned from his job as a prosecutor in the Middlesex district attorney’s office and moved to the re-drawn Fourth District, which stretches from Brookline and Newton to Fall River, after Democrat Barney Frank said he would not seek reelection.

He trounced his two lesser-known primary rivals and cruised on to a comfortable general election win over a Republican opponent.

Kennedy had worked less than three years as a prosecutor before running for office. He attended Harvard Law School, where Warren was one of his professors and where he met his future wife, who is now a health policy lawyer. The two married in 2012. They have two children: Eleanor, 3, and James, 1.

After law school, Kennedy, who is fluent in Spanish, traveled to the Dominican Republic, where he spent two years as a Peace Corps volunteer.

During his four terms in Congress, Kennedy has focused on several signature issues, including transgender rights, health care and mental health care parity, and immigration.

After President Trump took office, Kennedy started to raise his profile by speaking out against the controversial policies of the administration and House Republicans, who were still in power.

He started to generate viral moments, important currency in the current polarized political climate. A minute-long, middle-of-the-night House committee speech he gave in 2017 criticizing GOP efforts to repeal Barack Obama’s health care overhaul as “an act of malice” was viewed close to 10 million times within days.

Raised in Brighton and Cambridge, Kennedy is the son of Joseph P. Kennedy II and Sheila Rauch Kennedy, who divorced in 1991. His father was elected to Congress from a Boston-based district in 1986. The elder Kennedy bailed on a run for governor in 1997 and retired from Congress, serving through January 1999.

Matt Stout of the Globe staff contributed to this report. Victoria McGrane can be reached at victoria.mcgrane@ globe.com.
Loading comments...
Most Popular in metro
Real journalists. Real journalism. Subscribe to The Boston Globe today.