Michael R. Bloomberg, the billionaire and likely presidential candidate who’s long waged a fight against tobacco, is urging Governor Charlie Baker to sign Massachusetts’ newly passed ban on sales of flavored tobacco and vaping products, calling it a “model for the U.S.”

“With the Trump [administration] lacking the courage to stand up to the tobacco industry, it’s critical for cities and states to step up,” Bloomberg wrote Thursday in a tweet to his 2.32 million followers, in which he also tagged Baker’s official Twitter account.

“I hope @MassGovernor signs it as soon as it reaches his desk.”

The bill, passed after midnight Thursday by the Legislature, is officially on Baker’s desk, though the Republican said he still needs to read its details. He has 10 days to act on it.

Baker has been supportive of a ban on the sale of flavored vaping products, including in a controversial temporary ban he ordered in September. The legislation before him, however, goes further in some respects, banning the sale of all flavors, including for mint and menthol cigarettes, which have remained exempt under a 2009 federal law that banned flavored cigarette sales. 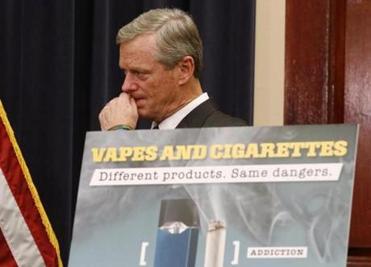 The legislation — a forceful response to an epidemic in which one out of every five Massachusetts high-schoolers use e-cigarettes — was completed after midnight Thursday and just before lawmakers broke for a weekslong recess. It now awaits action by Governor Charlie Baker.

The bill would be the first to extend such a prohibition statewide, drawing wide praise from public health advocates who hope it opens the door to other states pursuing similar legislation. Convenience store owners and the vaping industry, however, fear it could cripple businesses and have warned it could simply feed into a black market.

In September, he also turned his attention — and his foundation’s resources — toward vaping, saying he planned to put $160 million behind a push to ban flavored electronic cigarettes in at least 20 cities and states.

Thursday marked the first time he’s publicly focused on Massachusetts, though Bloomberg has been a supporter of Baker’s for years. The former New York City mayor backed Baker in his 2014 campaign against Martha Coakley, a Democrat, and four years later, Everytown for Gun Safety — the gun control advocacy group Bloomberg helped found — endorsed Baker in his reelection bid.

Bloomberg also gave $490,000 to the pro-charter school campaign that pushed an unsuccessful 2016 ballot question to expand charter schools, which also had Baker’s support.

Baker in September ordered temporary ban on all vaping products, which at the time included marijuana products and marked the most wide-ranging prohibition a state had put in place amid an explosion of vaping-related illnesses and deaths nationwide. The bill on Baker’s desk wouldn’t apply to marijuana.

In an appearance Thursday on WGBH’s Boston Public Radio, Baker said he understood why some worry about keeping menthol cigarettes on the market after a caller, who identified himself as a retired homicide detective, raised the question of whether banning menthol cigarette sales could ultimately drive the illicit market across the state’s borders and into black communities.

“The concern from advocates about menthol cigarettes is that they have been promoted and marketed specifically in communities of color for a long time,” Baker said, noting that the flavor has a “smoothing impact” that can mask the burn when taking a drag.

But Baker said the “collateral question” the caller raised is one that, “if this thing becomes law, we’re going to have to make sure we spend time focusing on and addressing. Because it’s a legit concern.”