The leaders of France, Germany and Italy say the Paris climate accord cannot be renegotiated as President Donald Trump has demanded.

French President Emmanuel Macron, German Chancellor Angela Merkel and Italian Premier Paolo Gentiloni said in a joint statement Thursday that they take note ‘‘with regret’’ the U.S. decision to pull out of the 2015 agreement.

The three leaders say they regard the accord as ‘‘a cornerstone in the cooperation between our countries, for effectively and timely tackling climate change.’’

They added that the course charted by the accord is ‘‘irreversible and we firmly believe that the Paris Agreement cannot be renegotiated.’’

Macron, Merkel and Gentiloni say they remain committed to the deal and will ‘‘step up efforts’’ to support the poorest and most threatened nations. 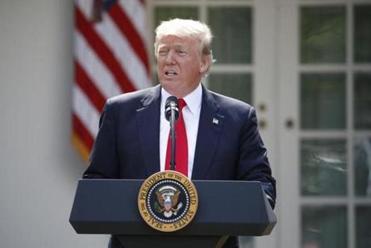 The move strikes a major blow to worldwide efforts to combat global warming and distances the country from its closest allies abroad.

The White House said Trump spoke with the leaders of Germany, France, Canada and Britain Thursday to explain his decision.

The president thanked the leaders for holding ‘‘frank, substantive discussions’’ with him on the issue. He reassured them that the U.S. is committed to the trans-Atlantic alliance and ‘‘robust efforts to protect the environment,’’ according to the White House readout of the call.

Trump also vowed that the U.S. will be ‘‘the cleanest and most environmentally friendly country on Earth’’ going forward.

The president met with all four leaders last week at the NATO and Group of 7 summits in Europe.

Meanwhile, U.N. Secretary-General Antonio Guterres called the U.S. withdrawal from the Paris climate agreement ‘‘a major disappointment.’’ He says through a spokesman it’s ‘‘crucial that the United States remains a leader on environmental issues.’’

Spokesman Stephane Dujarric said Thursday the U.N. chief believes the transformation envisioned in the accord is already underway.

Dujarric says the secretary-general is confident that cities, states and businesses around the world ‘‘will continue to demonstrate vision and leadership by working for the low-carbon, resilient economic growth that will create quality jobs and markets for 21st century prosperity.’’

He said the secretary-general ‘‘looks forward to engaging with the American government and all actors in the United States and around the world to build the sustainable future on which our grandchildren depend.’’