WASHINGTON — Harshly criticized yet again by his boss, Attorney General Jeff Sessions on Wednesday abandoned his usual stony silence and pushed back against President Donald Trump for saying Sessions’ response to Republican complaints about the FBI was ‘‘disgraceful.’’

Sessions gave no suggestion he would step down in light of the charge made on Twitter and insisted he would ‘‘continue to discharge my duties with integrity and honor.’’

Trump’s latest tirade stems from a comment Sessions made Tuesday, when he suggested the Justice Department’s inspector general will evaluate whether prosecutors and FBI agents wrongly obtained a warrant under the Foreign Intelligence Surveillance Act to monitor the communications of a onetime Trump campaign associate. Sessions had asked the watchdog office to review the complaints in response to pressure from congressional Republicans, who, like Trump, have fumed about what they believe to be bias within the FBI.

Trump tweeted: ‘‘Why is A.G. Jeff Sessions asking the Inspector General to investigate potentially massive FISA abuse. Will take forever, has no prosecutorial power and already late with reports on Comey etc. Isn’t the I.G. an Obama guy? Why not use Justice Department lawyers? DISGRACEFUL!’’

Sessions answered hours later, saying his department had taken the appropriate step and ‘‘will continue to do its work in a fair and impartial manner according to the law and Constitution.’’ 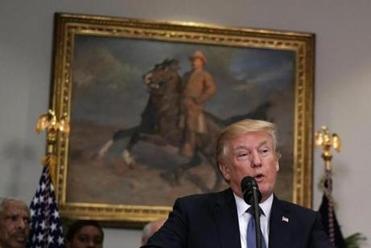 President Trump is hailing a legal victory for his promised border wall, but says sections in California will not built ‘‘until the whole Wall is approved.’’

It was hardly the first time the president has aired his gripes against Session over the Russia probe. The former Alabama senator, an early supporter of Trump’s candidacy, has endured a year’s worth of Trump’s wrath in order to hold onto the job he had long desired. But even for Trump, who once called the attorney general ‘‘beleaguered,’’ Wednesday’s volley elevated the rhetoric to a new level.

The exchange comes at a time of heightened tension between the Justice Department and the White House, which is mired in special counsel Robert Mueller’s investigation into Trump campaign ties to Russia and possible obstruction of justice. Trump has long viewed Sessions’ decision to step aside from that investigation as leading to Mueller’s appointment.

Sessions has become a Trump scapegoat, allowing the president to avoid some of the political consequences of directly attacking Mueller as his probe escalates.

Trump this time is angry that Sessions referred the allegations of employee misconduct to the inspector general, but that’s exactly what that office is charged with doing. Its lawyers are part of the department and, contrary to Trump’s claims, can and often do refer matters for prosecution.

The office has been working on a separate review of the FBI’s handling of the Hillary Clinton email investigation under former Director James Comey, but that report is not late and is expected to be released around March or April.

Inspector General Michael Horowitz’s office has acknowledged receiving Sessions’ request but hasn’t said it is investigating. Horowitz was appointed to the post by President Barack Obama, as Trump noted. But years earlier, Horowitz was named in the Bush administration to a seat on the Sentencing Commission, suggesting he has more bipartisan bona fides than Trump acknowledges. Horowitz also launched the review of the FBI’s handling of the Clinton case — the stated reason by Trump and Sessions for the dismissal of Comey in May.

Until now, Sessions had largely keep quiet in the face of Trump’s verbal and social media volleys, faithfully executing the president’s agenda on guns, drugs, violent crime and illegal immigration. Some within Sessions’ own department had criticized that silence as straining morale and making him seem too eager to appease the president at the risk of dangerously politicizing the institution.

The two bonded early in Trump’s campaign. But Trump has not been able to get over Sessions’ withdrawal from the Russia investigation and has relentlessly belittled him and pressured him to investigate political rivals. The criticism was so harsh that Sessions offered last year to resign; Trump refused.

Sessions has since tried to get back into Trump’s good graces. His request of the inspector general should have appeased Trump, as White House spokeswoman Sarah Huckabee Sanders suggested Tuesday it would.

‘‘It’s something that he’s clearly had frustration over so I would imagine he certainly support the decision to look into what we feel to be some wrongdoing,’’ she said. ‘‘I think that’s the role of the Department of Justice and we’re glad that they’re fulfilling that job.’’