WASHINGTON — Graduates of the Harvard class of 2003 are making known their displeasure with the current White House administration in an unusual way, using the platform of their 15th reunion alumni notes to launch harsh, personal attacks on a former classmate.

The salvos against Kushner — by a small number of alumni — are tucked in among the usual fare of alumni notes, where former classmates proudly recite their latest accomplishments, volunteer work, a move across the country, or the birth of a child.

Kushner is not expected to attend the 15th reunion festivities that begin Thursday in Cambridge, but his younger brother, Josh, is planning on attending his 10th Harvard reunion. Jared Kushner, through the White House, declined to comment.

Harvard has a tradition dating to the 19th century of allowing alumni to write in updates about what they’ve been up to — coming in five-year cycles and known informally, because of its crimson cover, as the Red Book — in a practice meant to encourage them to stay in touch with one another. Normally, those entries are more anodyne; rarely, if ever, do they involve attacks on a fellow classmate. 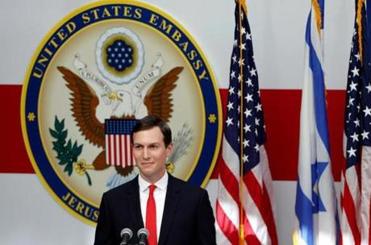 A look at some of the entries

The Globe spoke to some 2003 Harvard grads who contributed to the Red Book alumni listings ahead of their 15-year reunion, and thumbed through the book itself.

Organizers of the anti-Kushner effort set up a private “Shame on You, Jared Kushner’’ Facebook page about six months ago and urged their class of 2003 peers to use the Red Book as a platform of personal protest. Part of the goal is to let Kushner know that his service in the Trump White House will have lasting consequences, resulting in his potential ostracization from a valuable social network of his peers.

“Mostly, I feel low-grade, constant horror as I watch attacks on refugees, minorities, my most at-risk patients, women’s rights, and the environment, and new threats of nuclear war,” wrote one of Kushner’s classmates who said her grandparents were Holocaust survivors. “Shame on you, Jared Kushner.”

“Shame on you, Jared Kushner,” Chanda Prescod-Weinstein wrote. “And shame on Harvard.”

“I, for one, am actually glad that our Class of ’03 finally has a real, live fascist among us,” Jon Sherman wrote. “Who says Harvard isn’t diverse?”

Kushner, who attended his fifth reunion but not his 10th, did not submit an entry this year. Meanwhile, Hillary Clinton is an honored guest during part of the festivities, receiving the prestigious Radcliffe Medal on Friday.

The younger Kushner did not immediately respond to a request for comment. Harvard declined to comment, but the controversy gained attention after one member of the class — Ben Wikler, who is the Washington director of MoveOn.org — shared several entries on Twitter. The Globe also has a copy of the book and reached several of Kushner’s classmates.

By some accounts, Kushner was not a standout student in high school, but his father had dreams of sending his son to Harvard. Charles Kushner pledged $2.5 million to the school to help ensure he got in, according to “The Price of Admission,” an exposé by journalist Daniel Golden.

During his years on the Harvard campus — and living in Kirkland House — Jared Kushner fit in on the leafy campus. He had an active role in the Harvard Chabad, a campus Jewish group; played junior varsity squash; and was a member of an exclusive social club called The Fly. His yearbook entry listed him as the cooking editor of Current Magazine, a news and campus life publication.

But while getting his degree in government, he managed and developed properties in Somerville. The Globe reported last year on how he made a profit from those properties, but also made costly business errors, amassed housing complaints, and forced one group of tenants to take him to housing court to recover their security deposit.

Harvard students in the past have also tried to appeal to Kushner. Shortly after Trump was inaugurated, a student posted an open letter that was signed by more than 2,000 alumni in 24 hours.

“Harvard’s motto is simple. It is just a single word: Veritas. Truth,” the letter read. “We have seen disturbing signs that the Administration will suppress open thought and debate.”

As some of Kushner’s classmates began preparing for their reunion, they took different approaches in how to respond.

Macris’s full entry is only five words long: “Shame on you, Jared Kushner.”

“For me, I definitively felt like it was more impactful to say you’re not going to hear from me for another five years. This is a one-shot deal,” she said. “Would I have liked to [have] told my classmates to buy my book? Yeah. That would have benefited me a lot more. But that’s not where my head is.”

One classmate wrote a haiku:

Get out of there now”

Another classmate, Angelina Fryer, alluded to a litany of controversy Kushner has been involved in over the early start to the Trump administration.

Sherman, a Washington-based public interest lawyer, said his entry was inspired by animus toward Kushner. His grandmother was an Auschwitz survivor, losing 35 members of her family, and he views Kushner’s defense of Trump as a dishonor to her memory. So after updating his classmates on his legal career, and how he’s fallen in love, he turned to Kushner.

“It’s an opportunity — and other people saw it as that as well — to shame him,” Sherman said, calling Kushner “an utter disgrace.”

“I’m glad people are speaking out. This is a free country and there are going to be consequences for the way they’ve behaved during this time. Social consequences. . . . They can’t just return to their old life and walk around and go to restaurants in New York and D.C. and not get constant backlash.”

Prescod-Weinstein said she wanted to be more confrontational.

“We should be uncomfortable with the way Harvard functions as a steppingstone for people in power who may have terrible values,” she said.

“He was in Jerusalem with his wife while people were being massacred. I feel so emotional about that,” she added. “He’s a person who is doing horrible things. As a black woman and a Jewish woman, I think it’s disgusting. He’s not alone in doing these disgusting things, but he’s certainly one of the active participants.”

She said she was also disappointed that only a small portion of the 1,600 members of the class decided to speak out against Kushner.

“It’s emblematic of Harvard culture. I think people thought it was rude and didn’t want to be rude. But I think genocide is rude. And I was happy to be rude.”