Read more from the 2002 Boston Globe report on the Catholic Church abuse crisis.

This article was prepared by the Globe Spotlight Team; reporters Matt Carroll, Sacha Pfeiffer, and Michael Rezendes; and editor Walter V. Robinson. It was written by Pfeiffer.

The telephone call was urgent.

“There is a crisis,” the Rev. Brian M. Flatley, an archdiocesan official, told Dr. Edward Messner, a psychiatrist at Massachusetts General Hospital, on Dec. 30, 1994.

Messner’s notes from that day convey the gravity of the situation: “A priest had admitted abusing minors in the past and has been acting out again recently . . . police and the district attorney are involved . . .

The allegations mirror what has come up before.”

Six hours later, the Rev. John J. Geoghan and Messner began regular therapy sessions in which Geoghan admitted to being “drawn by affection and intimacy with boys” and, as an MGH psychologist wrote, “pointed out that his misconduct occurred, ‘during a time of sexual exploration for this country.’ ” 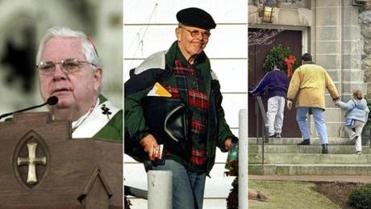 The Globe’s Spotlight report on the sex abuse scandal within the Catholic Church caused sweeping reforms and inspired the new movie “Spotlight.” Here’s a look at some of the stories that shaped the investigation.

In 1995 and 1996, according to court records examined by the Globe Spotlight Team, Geoghan explained why he preyed on children from poorer families: “The children were just so affectionate, I got caught up in their acts of affection. Children from middle-class families never acted like that toward me, so I never got so confused.”

Moreover, court documents that include Geoghan’s psychiatric records contain starkly contradictory assessments of his danger to children from different therapists. He received at least four clean bills of health between 1980 and 1990, a period when the Archdiocese of Boston assigned him three times to parishes despite his record of abuse; but prompted declarations that he was an incurable pedophile after he became a public embarrassment to the archdiocese in the mid-1990s.

For example, Messner’s notes show that Geoghan told him that Flatley, whose job was to deal with priests who had molested children, had branded him “a pedophile, a liar, and a manipulator.”

Collectively, the publicly filed church documents add detailed clinical evidence to what the Globe reported yesterday: Although the 1995 and 1996 psychiatric reports diagnose Geoghan with a deep-rooted sexual perversion, there were ample signs years earlier that he was unfit for parish work.

Yesterday, the Globe reported that Cardinal Bernard F. Law, during his first year in Boston in 1984, assigned Geoghan to St. Julia’s in Weston even though Geoghan had been removed from his two prior parishes for molesting children. In one of those cases, in 1980, Geoghan asserted that his repeated abuse of seven boys in one family, which was disovered that year, was not a “serious” problem. That is according to a church timeline of Geoghan’s career - six parish assignments in 34 years with accusations that he molested more than 130 children.

Law, after celebrating Mass yesterday at the Cathedral of the Holy Cross, reiterated the archdiocese’s statement of Friday that he would not comment on Geoghan.

The documents also contain evidence that Geoghan’s false denials of past sexual abuse through the 1960s and much of the 1970s helped justify a critical church decision that freed Geoghan to abuse even more children. In 1989, Geoghan was forced to take a six-month sick leave from St. Julia’s after more accusations of abuse surfaced. But Law soon signed off on a decision to return him to the parish, according to church documents.

The Spotlight reports of today and yesterday are based on public documents filed in connection with 84 civil lawsuits pending against Geoghan and two criminal cases, the first of which is scheduled to go to trial in Middlesex Superior Court next Monday. The archdiocese, Law, and five other bishops are defendants in many of the pending lawsuits, charged with negligence for not properly supervising Geoghan. Already, the archdiocese has settled 50 other lawsuits, paying more than $10 million to Geoghan’s victims.

The multiple accusations against Geoghan represent the largest scandal involving an American Catholic priest since the 1992 disclosure that former priest James Porter had abused more than 100 children in the Fall River Diocese in the 1960s.

The massive number of documents compiled by lawyers handling the 84 remaining civil suits have been under a confidentiality seal sought by the archdiocese. But based on a motion by the Globe, Superior Court Judge Constance M. Sweeney ordered that all the documents be made public. They are scheduled to be released on Jan. 26.

The documents already on public file detail the extent of Geoghan’s lengthy treatment history and make clear the church’s longtime knowledge of his misconduct.

The psychiatric documents offer added insights into Geoghan’s troubled mind and the motivations behind his aberrant actions - often as explained by Geoghan himself.

Geoghan was, by his own assessment, a heterosexual. But he told Messner during his treatment sessions that his victims were usually young prepubescent boys. He said he “avoided girls,” explaining, “I picked the boys because in some way they were the safest, the girls and the mothers would have been more dangerous.”

RELATED: Part 1 of 2: Church allowed abuse by priest for years

The records suggest there were early warning signs.

Geoghan, who is 66, attended St. John’s Seminary after graduating from Holy Cross College and was ordained in 1962. Deposition transcripts refer to correspondence from Geoghan’s seminary days in which his superiors conclude he has “pronounced immaturity.”

In an April 1995 session with Messner, Geoghan said that even as a newly ordained priest he would “experience arousal when there was physical closeness” with children.

In a June 1996 psychological assessment, Dr. Mark Blais, a Massachusetts General Hospital psychologist, concluded that Geoghan has a “powerful sense of emotional deprivation and emotional loneliness.”

Medical evaluations of Geoghan, which repeatedly cleared him to return to parish work after incidents of sexual misconduct in the 1970s and ‘80s, changed dramatically in the mid-1990s. By then, complaints against Geoghan were being made with unsettling frequency, and it was clear he risked becoming an embarrassment - and financial liability - to the Church.

In December 1984, for example, a month after being reassigned to St. Julia’s in Weston following his removal from St. Brendan’s in Dorchester, Geoghan underwent evaluations by two separate Boston-area psychotherapists. Dr. Robert Mullins declared Geoghan “fully recovered,” and Dr. John H. Brennan advised “no . . . restrictions to his work as a parish priest.”

Not everyone was comfortable with the assignment. Bishop John M. D’Arcy, a popular cleric whose forthright manner rankled Law, according to a friend of D’Arcy, wrote to Law in December 1984 to question Law’s decision assigning Geoghan to St. Julia’s because of his history of sex abuse. He warned that placing Geoghan there might result in further scandal.

Two months later, D’Arcy was gone, transferred to a diocese in Fort Wayne, Ind., which he has headed ever since.

New allegations against Geo ghan surfaced within two years, and again in 1989. But Geoghan told Bishop Robert J. Banks in March 1989 that he had “no more sexual attraction to children” and had been “chaste for five years.”

But the church’s own timeline of Geoghan’s misconduct suggests Banks did not believe him. Within weeks, Geoghan was sent to the St. Luke Institute in Suitland, Md., where he was diagnosed with “homosexual pedophilia.” The result: “Told by Bishop Banks he had to leave ministry,” according to a church record.

Instead, Geoghan was put on sick leave the following month, and in August was hospitalized for three months at the Institute of Living, a Hartford treatment center, where he was discharged in November 1989, as “moderately improved.” Banks agreed to send him back to St. Julia’s, subject to approval by another bishop and “BFL” - Cardinal Law.

But during 1995 treatment, psychologists at St. Luke concluded that during the 1989 treatment in Hartford, Geoghan did not tell the truth about the extent of his sexual abuse of children. He denied any incidents before the late 1970s, to include long-running instances of abuse dating to 1962. And the Institute of Living’s report to the archdiocese reflected Geoghan’s lie.

Moreover, the records state that Bishop Banks was “unhappy” with the Institute of Living’s discharge summary because it was “different from what he had understood and based his decision to allow Fr. Geoghan back to work.”

A reply letter from the institute reports: “The probability that he would act out again is quite low. However, we cannot guarantee that it could not reoccur.”

Yet the archdiocese was hit with more complaints in 1991, 1992, and 1994, although the 1992 accusation was dismissed by church officials as “hearsay and vague.”

Midway through his treatment with Messner, Geoghan was returned to St. Luke in January 1995. His diagnosis after that 10-day stay was far less optimistic than earlier judgments. “It is our clinical judgment that Father Geoghan has a longstanding and continuing problem with sexual attraction to prepubescent males,” his evaluation reads. “His recognition of the problem and his insight into it is limited.”

Therapists at St. Luke advised that Geoghan have no unsupervised contact with minor males and return for residential treatment, although Geoghan resisted the latter recommendation. Instead, he was sent in July 1995, to Southdown, an Ontario treatment facility, where he stayed for four to six months.

In 1996, Blais, too, submitted a pessimistic evaluation. “Treatment of such a chronic and deeply ingrained condition would need to be lengthy,” he wrote.

Geoghan was removed from the priesthood in 1998.