One of the best schools in this city — and perhaps the whole state — sits on the edge of Mattapan, a stone’s throw from Blue Hill Avenue. It has the feel of a high-end private school: Kids wear khaki pants and monogrammed shirts bearing the names of universities like Harvard and Yale, their homeroom teachers’ alma maters.

It also gets results like a private school: Sixty-seven percent of eighth-graders scored “proficient” or better in science and technology on the MCAS tests. Translation: They beat Boston Latin.

But there’s something else notable about Brooke Mattapan Charter School: Out of 508 students, just three are white, including the codirectors’ daughter.

Forty years after a judge ordered that busing be used to desegregate Boston’s public schools, charter schools are upending conventional wisdom about how academic excellence for black and Latino students is achieved. For decades, we’ve tried every trick in the book — from court-ordered busing to magnet schools — to get poor black and Latino kids into classrooms with middle-class whites. Integration was billed as not just a moral and legal imperative, but a panacea for the racial achievement gap.

Many charter school educators today, however, say that way of thinking is itself rooted in racism. 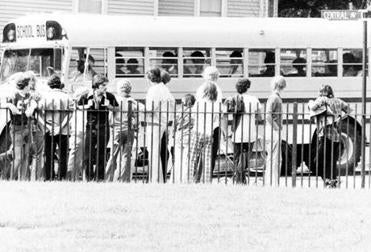 Farah Stockman: Still deciding what busing gained — and what it cost

How can we possibly build a common future when we can’t even agree on the past?

“There’s nothing about a school that makes it better by having more white kids,” says Kimberly Steadman, codirector of Brooke, who is white.

What about “separate can’t be equal”? Is that wrong?

And why settle for equal? Steadman has set her sights on superior. Her students routinely outperform those in predominantly white schools across the state.

Nobody argues anymore over whether Linda Brown, a black third-grader in Topeka, Kan., deserved the right to attend her local school, along with the white girls on her street. Nearly every American agrees with that landmark 1954 Supreme Court decision in Brown v. Board of Education, which struck down laws mandating segregation in public life. But considerable disagreement remains over just how far we should go to ensure racial mixing in schools, in a country that remains heavily divided along geographic lines of class and race.

After decades of mandating that school districts combat segregation by adopting race-conscious school assignment plans, the Supreme Court reversed course and limited the use of race as a factor in 2007. Nevertheless, some communities continue to find ways to promote integration.

Hartford has spent $2 billion over the last decade building magnet schools — including one with a planetarium! — to attract white families. It’s an impressive effort. And yet, only about half of Hartford’s kids get into a magnet school.

To Steadman, that money might be better spent building excellent schools for black and Latino kids. Instead of bending over backward to attract white, middle-class families, Steadman avoids them. The dance studio with the ballet bar, the music room full of xylophones, and the computer room aren’t featured on the school’s website. Too many white people might apply.

It’s not that middle-class white kids aren’t welcome here, she says. It’s just that those families have other good options. Why should they take a space from a kid that really needs it?

Steadman’s way of thinking flies in the face of the social science behind the Brown decision, which said that separation is inherently harmful to black kids.

“Racial separation has powerful and injurious impact on the self-image, confidence, motivation, and school achievement of Negro children,” Owen B. Kiernan, the Massachusetts commissioner of education, wrote in 1965. His report aided the passage of the Racial Imbalance Act — one of the most progressive laws of its time — which deemed any school that was more than 51 percent minority “racially imbalanced,” while a lily white suburban school got a clean bill of health.

Back then, people who cared about black kids’ education measured their level of exposure to white kids in school just as obsessively as we measure MCAS scores today. To veteran racial justice activists like Gary Orfield, co-director of the Civil Rights Project at UCLA, the drift away from those metrics is a tragic step backward. In 2010, Orfield released a report accusing charters of helping to “re-segregate” America’s schools.

But if we really care about the academic success of black and Latino kids, shouldn’t we look at where they’re doing the best? A look at charter schools Steadman argues that integration can actually be more harmful than separation if it sends the message that blacks and Latinos can’t achieve.

In Boston public schools, black and Latino students make up only 41 percent of “advanced work classes,” even though they’re 75 percent of the student body.

And here’s a stunning statistic: Nearly 40 percent of black American boys in middle school were classified as “special education” students. To their credit, Boston school officials involved with the “Boston Compact” set out to study schools that were doing better.

“They came and asked us about our special programs for black boys,” Steadman said. “We told them we didn’t have any special programs. We just treat them like everybody else. We teach them to read. To think. To stand up for their thoughts.”

Charter school critics suggest that they do better because they have fewer English language learners than the school population itself. There’s some truth to that. State statistics say just 5 percent of students at Brooke Mattapan are learning English in a school district where 30 percent are English language learners. But guess what? That’s also true of sought-after non-charters as well. For instance, at Mary Lyon in Brighton, only 6 percent are learning English.

Others suggest that charter schools do so well on the MCAS because they teach to the test. But if you visit Brooke Mattapan, you won’t see any sign of that. You’ll see second-graders explaining how they programmed a computerized bird to walk in a circle. You’ll see sixth-graders discussing “Crispin: Cross of Lead,” a novel about feudalism. You’ll see eighth-graders writing a “white paper” on immigration for Donald Trump. You’ll see boys in cornrows pecking away on scientific calculators in algebra class — a subject that only a third of eighth-graders in this city get to take.

Others suggest that charter schools get good results because they kick out the bad apples. But Brooke has one of the lowest attrition rates in the city.

Perhaps the biggest factor in Brooke’s success is how much school the kids attend. They go from 7:45 a.m. to 4:30 p.m. every day, except Wednesday afternoon, which is reserved for teachers’ professional development. That’s about two hours a day more than most of Boston’s public schools. Their school year lasts 192 days, instead of 180. That adds up to more than 350 hours of additional instruction.

For a quality education like that, Boston’s black families seem more than willing to give up the ideal of integration. Diversity has become a luxury, not a necessity.

“Diversity is important, but I don’t think it’s a magic bullet,” said Kim Janey, senior project director at Massachusetts Advocates for Children, who was bused from Roxbury to Charlestown as a child. “The desegregation fight . . . was really a fight for quality. I want to be very respectful of those who came before me and were fighting for something better, but we did not get there. I did not get a better education in Charlestown. It was not a better school.”

Janey said many blacks of her generation became disillusioned with Boston’s public schools — and the obsession with “racial balance” — after experiencing racism and rejection as kids during the tumultuous busing era. We’ve all heard about the white flight that followed busing, but black flight has also taken a toll. The number of black kids in Boston public schools has been steadily declining. Today, nearly a third of all black school-aged children in this city don’t attend a traditional public school. Fifty percent of all charter students are black, in a school system that’s just 35 percent black.

In fact, black leaders have always debated how prominent a role integration should play in the struggle for civil rights. In 1935, WEB Dubois wrote that as long as white teachers looked down on their black students, black kids would fare better in their own schools.

And here’s a forgotten bit of history: In the 1960s, black activists in Roxbury grew so frustrated by white teachers’ low expectations for their kids that they set up their own “community” schools. Mel King — a black activist elected to the state Legislature in 1972 — tried to obtain government funding for them, as a compromise in Judge W. Arthur Garrity Jr.’s school desegregation case.

“We wanted the system developed in the way that each community could run its schools in the way that they saw fit,” King told me. “The white reps went and talked to the teachers union, and they told them no, it would cost them jobs. Because of that, we could not go to Garrity and say ‘Look, we have a different plan.’ ”

King, who went to an integrated school in the South End as a child, knew that there was nothing magical about sitting next to white students in class. He saw the Garrity case as the second-best option to the problem of how to get more resources and more black teachers into black children’s schools.

And for the most part, it worked. According to Berkeley economist Rucker C. Johnson, black kids who grew up in school districts that were under desegregation orders had higher graduation rates, went to better colleges, earned more money, and were less likely to go to prison, all without a measurable impact on whites. But a large part of that success was money. Desegregation led to huge boosts in per-pupil expenditures on black students, especially in the South. School districts that integrated but did not increase funding failed to see the same results.

What’s the lesson for today? Integration alone doesn’t produce a quality education. And as important as it is for all children to learn to live, work, and play with kids of other races, it can’t be our only strategy for success.

This is going to become even more true going forward. As our nation heads toward a not-too-distant future when whites will be a minority, demographic realities will make integration more difficult. White students are scarce in most Boston public schools, not just because of white flight, but because fewer white babies are being born. If white kids are an essential ingredient for quality schools, we’re in trouble because we’re running out of them. Luckily, schools like Brooke are proving that black and brown kids can achieve excellence on their own.

This piece is part of a series of columns about Boston — four decades after busing — supported by the Sigma Delta Chi Foundation. Farah Stockman can be reached at fstockman@globe.com. Follow her on Twitter @fstockman.

Correction: An earlier version of this column described the student body of most top charter schools in Boston as overwhelmingly poor, black, and Latino. State statistics suggest that K-8 charter schools have lower levels of poverty than the school district as a whole, although many high-performing charters have higher poverty levels than the highest-performing traditional public schools.