My Uncle Ian enjoyed asking his younger brother when that wastrel Niall would leave college and get a real job. The implication was that, by becoming an academic, I had essentially failed to grow up. I sometimes think Uncle Ian was right.

One of the attractions of university life to me was precisely that academic jobs were not like real jobs. At Oxford, my tutors inhabited large studies with towering bookcases. They wore not suits but well-worn tweed jackets. During the vacations, they were free to do as they pleased, so long as they occasionally published books. I resolved to join these happy eggheads.

In those distant days of the 1980s, academic historians came in different flavors. There were fierce Marxists. There were brilliant liberals. There were acerbic Tories. On the whole, I found the Tory dons more fun. We Oxford Thatcherites were a minority, but we had our mentors, and they egged us on.

Fast forward more than 30 years and I find myself at Stanford. My don’s life has been not exactly as I had imagined it then, but near enough. Books? Fifteen at the last count. Scruffy jackets? A wardrobe full.

But there is one huge difference that has crept up on me almost imperceptibly. Today, unlike in the 1980s, there are scarcely any conservatives to be found among academic historians. 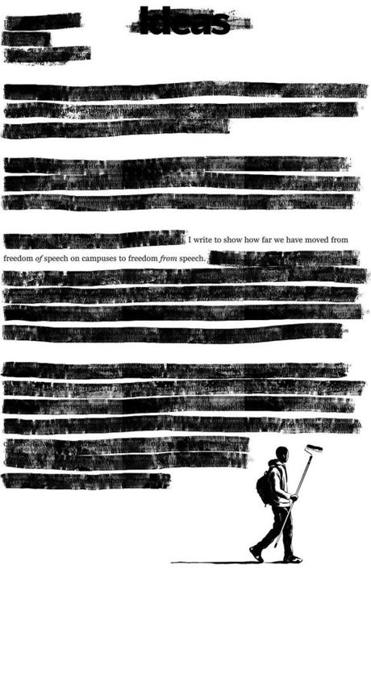 Challenging students to encounter controversial material prepares them to be resilient for the rest of their lives.

In American history departments, according to a 2016 study of 40 leading institutions , registered Democrats outnumber Republicans by a ratio of 33.5 to 1. The ratios are higher if you exclude older faculty members, so the trend is clearly the progressives’ friend.

This helps explain why, shortly after taking up a post at Stanford’s Hoover Institution, I was approached by a succession of students, some (not all) conservatives. Their common complaint was that the campus was dominated by progressives. Their common goal was intellectual diversity.

Remembering Oxford, I offered encouragement. I suggested the creation of a visiting speaker series. I opposed those who argued that only conservatives should be invited. I suggested “conversations” rather than adversarial debates. Since the president and provost also wished to promote free speech at Stanford, we joined forces. Seeking a bipartisan basis for the initiative, we brought in a colleague, Mike McFaul (a Democrat) and involved all the different student publications, left- and right-leaning alike. We organized five such “Cardinal Conversations,” on subjects ranging from technology and politics to populism and inequality.

There was (as I had anticipated) opposition from the outset. In particular, our invitation of Charles Murray, the author of “The Bell Curve,” provoked outrage from the campus left. Eight student groups joined forces to write a letter to the president, calling for Murray’s invitation to be rescinded. “Murray’s work is not an academic undertaking,” they wrote. “It is a foundation for white supremacy.” When the event nevertheless went ahead, they organized a noisy protest outside.

So far, so predictable — though I had never expected to hear students chant “F*** Steve Bannon / F*** the Western canon.” What I also had not foreseen was that the protest leaders might attempt to take over the student steering committee we had established.

I had met with the representatives of the various aggrieved student groups. I had heard their charge that I was “weaponizing free speech.” I had satisfied myself that their antipathy to Murray was not based on any reading of his work.

I had no objection to these groups’ views being heard, but I began to fear they were seeking an effective veto power over future events. The existing committee was not unrepresentative: Only half its members were white; half its members were women. By contrast, the different groups represented by the “coalition of concerned students” seemed to constitute a rather small proportion of the student body. When I heard that an emergency meeting had been called by their leader to change the structure of the committee, I decided to mobilize the college Republicans.

Now that the e-mails we exchanged have been published, I stand condemned for my intemperate language. Fair enough. As soon as it became clear that these e-mails had been inadvertently forwarded to unintended recipients, I resigned from Cardinal Conversations.

Re-reading my e-mails now, I am struck by their juvenile, jocular tone. “A famous victory,” I wrote the morning after the Murray event. “Now we turn to the more subtle game of grinding them down on the committee. The price of liberty is eternal vigilance.” Then I added: “Some opposition research on Mr O. might also be worthwhile”— a reference to the leader of the protests.

None of this happened. The meetings of the student committee were repeatedly postponed. No one ever did any opposition research. The spring vacation arrived. The only thing that came of the e-mails was that their circulation led to my resignation.

From all of this, I draw two conclusions. First, this fiasco might have been avoided if conservatives at universities did not feel so beleaguered. There is a debate about how far free speech has been restricted on American campuses in recent years. I have no doubt that Jonathan Haidt and Sean Stevens are right: It has. Middle-of-the-road students live in fear that a casual remark will be deemed “offensive” or “triggering” by the progressives and that social media will be unleashed to shame them. Conservative students have to decide whether to remain in the new ideological closet or come out and fight a culture war in which they are hopelessly outnumbered.

The other lesson I have learned is that my Uncle Ian was right: I really do need to grow up. Student politics is best left to students. So I am putting my tweed jacket back on and retreating into my beloved study. It is time to write another book.

Niall Ferguson’s latest book is “The Square and the Tower: Networks and Power from the Freemasons to Facebook.”
Loading comments...
Most Popular in opinion
Real journalists. Real journalism. Subscribe to The Boston Globe today.