President Trump was booed and jeered Sunday night during Game 5 of the World Series in Washington, D.C. Yet from the heated reaction in some quarters, one might have thought he’d been told to go back to where he came from or had been forced to live in a filthy cage with little access to showers or toothbrushes.

Democratic Senator Chris Coons said that “even at a time when there is a lot that our president does that I find disturbing, offensive, unconventional, I have a hard time with the idea of a crowd on a globally televised sporting event chanting ‘lock him up’ about our president. I frankly think the office of the president deserves respect, even when the actions of our president don’t.”

Joe Scarborough and Mika Brzezinski, co-hosts of MSNBC’s “Morning Joe,” clutched their pearls even tighter. “It’s un-American,” Scarborough said, as Brzezinski nodded. “We are Americans, and we do not do that. We do not want the world hearing us chant, ‘lock him up’ to this or any president.”

With everything Trump is doing to besmirch the nation’s international reputation, there’s way too much hand-wringing over jeers at a baseball game. Among others, those in “shithole countries” assailed by Trump, or the Kurdish people whom Trump has abandoned, could probably say far worse about a man whose “America First” edict means “America only” — and not even all Americans at that. 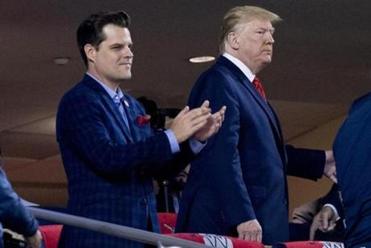 Divided we fall even lower

“Lock him up?” It’s hard to find a national issue that will bring the country together and recognize its shared future as Americans. Maybe that’s always been the case and we simply mythologize the past.

It’s easy to imagine millions around the world nodding in agreement at the boos, while the dictators he champions who use him for their own nefarious purposes chuckled at his public humiliation.

After years of “lock her up’’ chants targeting former secretary of state Hillary Clinton and, more recently, racist “send her back” jeers aimed at Somali-American Representative Ilhan Omar, it was refreshing to see that ugly phrase tossed back at Trump. That won’t be the last of it.

As much as Trump likes to tout phony polls with sky-high approval ratings, he must recognize that he’s the most unpopular president in modern history. He certainly heard those boos at Nationals Park — his smile collapsed faster than a bad souffle.

Trump hasn’t expanded his core support since he won three years ago. He has his base, and nothing else. He usually avoids anything but the most carefully choreographed public events. This was his first time attending a baseball game as president, and he stayed insulated from the crowd.

It’s why he has so many of those ego-boosting rallies, so his ardent fans can shower him with the adoration he believes he deserves — as if a half-filled arena represents America. It’s also why his skybox entourage at the Houston Astros-Washington Nationals game comprised his most devoted GOP sycophants in the House and Senate, including Senator Lindsey Graham and Representative Matt Gaetz.

They’re like the dust cloud that always surrounds Pig-Pen in Charles Schulz’s “Peanuts.”

As the impeachment inquiry heats up, and more witnesses come forward to call out Trump’s unconstitutional behavior, a nation’s patience is wearing thin. On the day when he announced the death of ISIS leader Abu Bakr al-Baghdadi, about 12 hours earlier, Trump was probably expecting sustained applause from the fans for his victory lap.

Instead, he received resounding boos and “lock him up.” Even the Nationals’ owners didn’t want to be anywhere near him. There were also two men holding a “Veterans for Impeachment” banner behind home plate that was visible on television.

“The Trump administration has made cruelty a norm, and it doesn’t represent the ideals which inspired me to enlist,” said Naveed Shah, who displayed the banner along with fellow Iraq war veteran Alan Pitts.

That’s also the likely message of those who booed Trump — he does not represent them. They weren’t disrespecting the office he holds, but what he and his administration are doing to it. However small that moment is, it feels like the beginning of a national tipping point. Booing a president is democracy in action. Meanwhile, scolding his critics and preaching for empty civility while that president debases democracy is about as un-American as it gets.