A GROUP OF investors has made a big bet — not on a company, but on a local nonprofit, the Jewish Vocational Service.

With an infusion of $12.4 million from the investors, the organization will offer vocational English-language lessons to about 2,000 immigrants and refugees in Greater Boston. If they’re successful — that is, if the students learn, and are then able to move on to higher salaries over the next three years — the investors will get the money they invested back from the state, plus a profit of up to $2.6 million.

If the organization fails, though, so do the investors: They’ll lose their ante if the program doesn’t meet agreed-on goals.

The arrangement is the state’s third “pay-for-success” deal, and the first of Governor Charlie Baker’s administration. Pay-for-success financing is an innovative approach to paying for social-service projects that might otherwise languish amid tight state budgets. The state only pays if the intervention meets its targets, eliminating the danger that taxpayer money will be wasted. 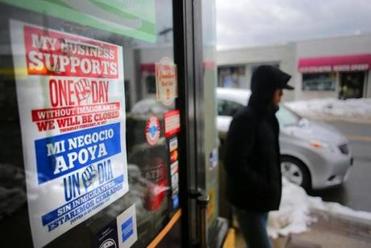 Pay-for-success got its start in Massachusetts in 2014, when the administration of then-Governor Deval Patrick struck a deal with Roca, a Chelsea nonprofit, aimed at keeping about 1,000 at-risk young men out of jail. Nationally, jurisdictions have signed 17 such deals. They have been especially attractive in criminal justice, where results are relatively easy to measure; the new immigrant-education program that the Baker administration hammered out with the vocational-services nonprofit is the first of its kind. A third-party evaluator, Economic Mobility Corporation, will judge the results and decide whether the investors get their money back.

Pay-for-success programs first took root in the United Kingdom about a decade ago, and most American examples remain in their early stages. Two developments since the Patrick administration’s initial deals, in 2014, though, have helped bolster the case for the pay-for-success model.

The first is the apparent success of the Roca program. Preliminary indications suggest that the nonprofit is at or close to meeting its goals.

The second positive development, ironically, was a setback. In 2015, New York City’s $7.2 million pay-for-success anti-recidivism project at Rikers Island jail ended in failure; the investor, Goldman Sachs, walked away with nothing. While it was a disappointing result, it showed that pay-for-success isn’t a loan in disguise, and that the risk assumed by investors is real.

The possible use of up to $15 million in taxpayer money to repay the investors is appropriate, since a better-educated workforce serves the Commonwealth’s goals. But by shifting the program’s risk to investors, the state has ensured that taxpayers won’t have to foot the bill if the program turns out to be ineffective.