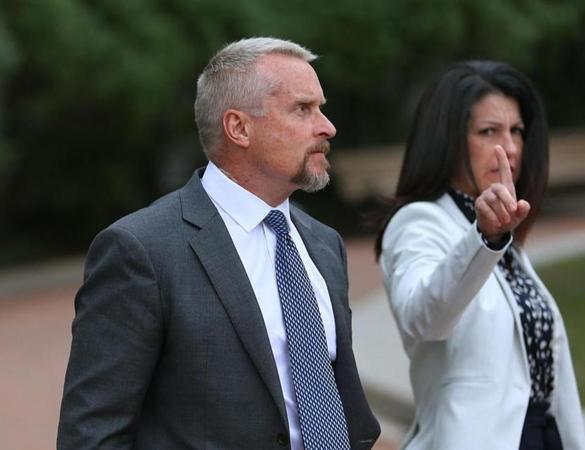 Several State Police supervisors regularly ordered rank-and-file troopers in a scandal-ridden unit to skip overtime shifts that they were paid for, a former trooper says in a newly unsealed court filing. 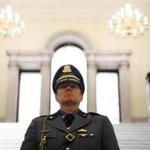 State Police head stays in the shadows amid unrelenting scandals 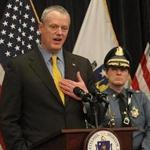 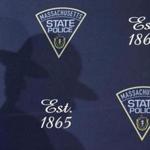 The trooper’s past infractions included a citation for having an open container of alcohol in his vehicle while also speeding.

Anne Lynch evolved from managing the day-to-day business of trade associations to running a firm that pushed the interests of dozens of organizations, including the powerful state troopers union.

Forty-six troopers have been accused of collecting overtime pay for hours they didn’t work. One citizen complaint helped expose the massive, years-long scam.

Another former trooper is sentenced in overtime scandal

Paul Cesan, 51, of Southwick, was sentenced in federal court to one day in prison deemed served.

A former Massachusetts State Police trooper ensnared in the high-profile overtime scandal was sentenced in federal court Thursday to one day in prison, which was deemed already served.

Investigators concluded that State Police did not deliberately withhold information from prosecutors, according to a report.

A former State Police shift commander and a trooper ensnared in the high-profile overtime scandal were each sentenced to a single day of prison, which a judge deemed had already been served.

Trooper in OT scandal says many of his colleagues also committed fraud, bosses knew about it

A former trooper facing federal sentencing for his role in the overtime scandal wrote about how the conduct was widespread but “only a handful of us were singled out for federal prosecution.”

The department said the years-old citations were destroyed as part of a records purge. Federal prosecutors now say it prevents them from examining the extent of the fraud.

Kevin Sweeney, 40, of Braintree was sentenced to two months in federal prison, plus one year of supervised release.

Coming up with the money to pay back the IRS in full will require special approval from lawmakers.

Several initiatives are partially, if not entirely, unfulfilled, and a shift in culture at the troubled agency has proven stubbornly elusive.

In a new court filing, federal prosecutors say a quota system for troopers to issue tickets to motorists was more widespread within a troubled State Police unit than previously disclosed.

Cameras record the license plates of every vehicle that drives over the two bridges, the data fed to a vast, growing database that now includes more than 100 million trips.

4 troopers suspended in OT scandal win their jobs back

The department failed to follow proper due process procedures in disciplining four troopers, according to a state Civil Service Commission ruling Thursday.

Retired trooper Gregory Raftery, 48, of Westwood was ordered to serve three months in federal prison for collecting pay for hours he did not work.

Eric Chin, 46, of Hanover was sentenced to a year of supervised release, including three months of home detention, and ordered to pay $7,000 in restitution.

Prosecutors allege a former trooper destroyed copies of traffic citations as part of his scheme to cover up how he skipped hundreds of hours of overtime shifts.

Trooper Robert Sundberg was convicted on two counts of rape, assault with intent to rape, strangulation, stalking, and five counts of assault and battery on a household or family member.

The Massachusetts State Police has repeatedly denied the existence of ticket quotas in recent years, but federal prosecutors outlined such a system last week.

A federal jury last year found that State Police unfairly denied a black applicant. Now, he wants a judge to order the agency to give him a job.

The Supreme Judicial Court for the first time interpreted the state’s workplace discrimination law to cover management decisions on which employees are given lateral transfers.

At the Massachusetts State Police, eight in 10 troopers are white men, no minorities hold high-ranking positions, and there have been numerous discrimination accusations.

Under fire for a wide-ranging criminal overtime fraud scandal, the Massachusetts State Police curbed payroll spending — slightly — during 2018 for the first time in years.

David Wilson of Charlton, John Giulino of Lanesborough, and David Keefe of Norfolk stole thousands of dollars through claiming bogus overtime in 2015, the AG said.

Trooper Heath McAuliffe was released without bail on several conditions after an initial US District Court appearance Wednesday.

Prosecutors will recommend a sentence between 10 months and 16 months behind bars for Paul Cesan, per a plea agreement.

Facing a federal fraud investigation, the former head of the Massachusetts State Police union has retired from the job he held for the past three decades as a trooper.

Dana Pullman is at the center of his own federal fraud investigation, with investigators asking whether the union leader was helping himself while helping others.

The group of current and former members of State Police and other law enforcement is calling for the creation of an oversight panel whose members have no ties to state politics.

The governor said allowing his office to consider candidates who have a law enforcement background but are not within the State Police ranks “is certainly worth talking about.”

One suspended state trooper and one retired trooper agreed to plead guilty in connection with an ongoing investigation into overtime abuse, the US attorney’s office in Boston said Friday.

The retired lieutenant is one of several current and former troopers facing criminal charges stemming from an overtime fraud probe that has rocked the agency.

The head of Massachusetts State Police has launched an investigation into new accusations of trooper payroll fraud, alleging some members used the union as an excuse to take paid leave.

The department sought to destroy boxes filled with potential evidence in the department’s ongoing internal audit, as well as federal and state criminal probes, into alleged overtime fraud.

Sergeant Mark S. Lynch was appointed to the post by the board of the powerful State Police Association of Massachusetts.

Troopers are retiring at a record clip this year, amid a growing workload — a trend that experts say could cost taxpayers money, imperil public safety, or both.

Dana Pullman said he was stepping down as union president for “personal reasons,” but it comes as the union faces a burgeoning criminal investigation.

A key focus for Ernst & Young will be how the state’s largest law enforcement agency manages and monitors employee earnings and benefits.

They are the first to be charged by the state since it launched its probe into overtime abuse, and come after the US attorney’s office has brought federal charges against six current and former troopers in an investigation that is also ongoing.

A former Massachusetts State Police trooper was indicted by a federal grand jury Thursday for allegedly collecting thousands of dollars in overtime pay for shifts he didn’t work.

The Internal Special Audit Unit for State Police will be a division of the Inspector General’s office, an independent state agency.

Questions about how Trooper Leigha Genduso, an unindicted co-conspirator in a major marijuana trafficking case, became a civilian dispatcher in 2008 and then a trooper erupted earlier this year.