Three months. To hear Reggie Miller tell it, that was the difference between an NBA comeback with the Celtics and a continuing career in broadcasting.

In August 2007, Celtics president Danny Ainge tried to coax Miller out of retirement. Ainge said he “felt like the team needed experienced shooting, someone who was unafraid to take shots at big moments of games.” Ainge saw Miller as a secondary scorer, someone who could make shots when Paul Pierce and Kevin Garnett were double-teamed.

During a week of intense training, the then-42-year-old Miller shared the same vision. The former Indiana Pacers shooting guard went through two workouts a day, trying to will his body back into shape with five hours of basketball and conditioning drills. He slept with ice packs on his lower back and calves, trying to speed the recovery process.

But as enticing as the Celtics’ offer was, Miller quickly concluded that the final buzzer had sounded on his playing days.

When it comes to gambling on older players, success depends largely upon having the right situation at the right time. Management tries to create the right mix of younger players with upside and older players with specific skills and championship experience. As Ainge contemplates whether to pick up Pierce’s contract option, he is seeking the right blend and surveying the entire NBA landscape. 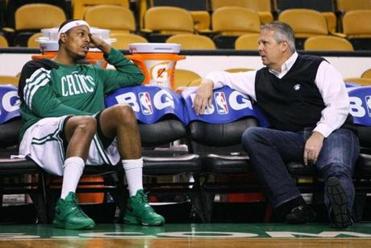 Team executives and older players both know alternatives always exist, though the players usually try to block out the alternatives that don’t involve playing. Still, Miller recognized that the Celtics’ offer simply wasn’t the right situation at the right time.

“It wasn’t enough time for me to shock my body,” said Miller. “As an NBA player, you need more than a week.

“I probably could have played, but to me that would have been stealing if I was going to play there at 70 percent. I wanted to be 95, 100 percent for the Celtics. So if Danny would have called earlier in the summer, where I had a chance all summer just to work out and do all that, it probably would have happened because it would have been easy to train my body and get ready.”

But Ainge couldn’t make the call in June. At that point, he didn’t know what shape the Celtics would take, couldn’t forecast that Garnett and Ray Allen would join the roster that summer.

Ainge, however, believed the Miller move would work with the right mix of players and the right role.

“I wouldn’t have wanted to have Reggie just to have Reggie as an old man, except for the team that we had,” said Ainge. “I thought that he could help. But we could have been patient with him.

“Reggie could probably still play until he’s 43, standing off the ball in the corners making shots. I felt like he still could provide what we needed. But Reggie is a perfectionist. He had high expectations for himself, I’m sure.”

If they play past 35, athletes must manage their expectations and their legacies. For all the money that might be dangled out there, there is an acute awareness of how poor it can look when an aging player unwisely prolongs his career.

“I felt I probably could have played another two, maybe three more years,” said Miller, who retired at 39 in 2005. “But I was so used to playing at such a high level. I didn’t want people to be like, ‘It’s time to go,’ as opposed to me going on my own terms.

“And I wanted to go out still being that gunslinger that people remembered drafting in 1987. I felt I had accomplished that.”

And there is a lot of value in that, too.

Shira Springer can be reached at springer@globe.com.
Loading comments...
Most Popular in sports
Real journalists. Real journalism. Subscribe to The Boston Globe today.