FORT MYERS, Fla. – Why is Yoan Moncada worth a $63 million gamble by the Red Sox? Because he represents the kind of player to whom the team almost never has access.

So who is he? Why would the Red Sox commit so much money to a player who has followed a free-agent trajectory unlike any other, having been given permission by the Cuban government to establish residency in Guatemala for the purposes of playing with an MLB team?

Here’s a rundown based on conversations with multiple major league talent evaluators.

Moncada has the sort of size, athleticism, and strength almost never seen among teenage baseball players. He is tremendously strong for his age, showing the ability to drive the ball out using a wood bat to all fields. He’s a switch-hitter who has played shortstop, but whose most likely path to the big leagues was considered either second base or perhaps third, though given his speed, there’s also a belief that he could adapt to playing outfield.

Moncada hit .277 with a .388 OBP, and .380 slugging mark with four homers and 21 steals (in 32 attempts) in two seasons playing in Cuba’s Serie Nacional. He walked in 10.9 percent of plate appearances and struck out in 18.8 percent of plate appearances, marks (even against the wildly divergent quality of Cuban pitchers) that aligned with the view from a couple of workouts that he showed solid strike zone awareness. 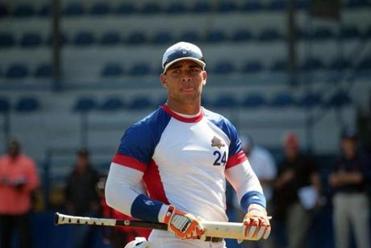 The 19-year-old switch hitter will receive a $31.5 million signing bonus.

One evaluator compared him to “a taller version of [Yoenis] Cespedes,” while another struggled to find a comparable athlete for Moncada.

“I can’t remember seeing a 19-year-old who was this physical,” he said, noting that Moncada is sufficiently developed physically that his skills aren’t merely the stuff of projection. “He’s got developed, 19-year-old tools,” said the evaluator.

Moncada displays above-average power to all fields, earning in the eyes of one scout a 60 present grade and a 70 future grade on the 20-80 scale, with a future 60 grade as a hitter. He appeared more comfortable in workouts hitting lefthanded than righthanded (one evaluator noted that he was carved up by lefthanders in live batting practice), though given Moncada may not have faced any lefties for a lengthy stretch of time leading up to his workouts, it’s difficult to say whether that represents a decisive weakness.

Evaluators do not expect him to stay at shortstop. His most natural fit seems to be at second base, though he has the athleticism and glove to move to third or the outfield, particularly given his speed.

In Cuba, he was viewed as an elite runner (according to Baseball America’s Ben Badler, he beat Red Sox outfielder Rusney Castillo in a pair of baserunning races that were part of an All-Star competition in Cuba in 2013), though his speed might tick down as he fills out.

One evaluator said it was fair to characterize him as having a present running grade of a 70, but with the chance that as he continues to add strength, he’ll be somewhere closer to average to a tick above. However, a decline in his speed isn’t expected to occur imminently, so for now, there’s a chance that he could be a player with a full complement of above-average tools.

“I don’t think he’s the same athlete that Mike Trout is, but it’s an explosive body in a 6-foot-1 or 6-foot-2 frame who’s a switch-hitter who can run. It lights you up for sure,” said an evaluator. “This guy’s explosive. You could hit really, really big on him.”

How far is he from the big leagues?

Moncada is more polished than the typical high school draftee, but he’s not considered big league ready. An instructive case could be someone like Jorge Soler, who signed with the Cubs out of Cuba as a 20-year-old in 2012 and spent his first year in rookie ball and Single A. He spent 2013 in High A before progressing from Double A to the big leagues in 2014. Moncada has spent more time competing at the highest level in Cuba, and so he might be more polished.

Based on those precedents, Moncada’s experience in Cuba suggests a young player who is likely ready to compete at any level from Single A to Double A in the near future. Given Iglesias’ struggles in Triple A at a young age, the Sox use a more conservative path – Single A or High A – to permit Moncada to acclimate to a new playing environment. That likely would put his big league ETA no earlier than late 2016

Here’s the catch: There’s been incredibly limited opportunity for teams to evaluate Moncada in actual games.

He impressed in private showcases (the Red Sox, according to a source, had at least one private workout for him), but unlike traditional draftees or even international amateurs, teams didn’t get to expose him to a bunch of games at academies to face live pitching. Of course, teams do monitor TV feeds of Serie Nacional games from Cuba, so Moncada is more than just a tools-driven lottery ticket.

But teams had to go through the exercise of pulling pitchers (whether minor leaguers or even junior college arms) to throw to him and get a read of how his swing and approach worked. So, as was the case with Rusney Castillo (to whom the Red Sox committed $72.5 million for six-plus seasons), the evaluative setting was imperfect.

Should the Red Sox really have spent so much?

“Spend if you got it!” one evaluator observed.

Moncada is more advanced, and thus a safer bet, than most of the 16-year-olds who are available in international free agency. His combination of speed, power, and athleticism is almost never available to teams except in the very first few picks of a draft. The best years of his career should be ahead of him – something that the Sox are quite clearly prioritizing, given the team’s willingness to hold the line with free agents in their 30s (Jon Lester) while setting the market for players whose prime years are ahead of them like Castillo and Moncada.

Meanwhile, the Sox had already blown past their international spending guidelines (approximately $1.9 million) for the 2014-15 international amateur signing period, something the team did by signing a pair of highly regarded starting pitchers (Anderson Espinoza and Chris Acosta) to a combined $3.3 million in bonuses.

Given the limited chance to see Moncada in games, there’s unquestionably risk involved. The list of can’t-miss phenoms who actually missed is long. The Red Sox’ $63 million investment ($31.5 million for a bonus and the 100 percent penalty as a team that had spent past its international allotment) is a bet that he is a phenom.

Is that all the Red Sox are spending on him?

No. Unlike Rusney Castillo, who signed a major league contract that defined his salary for each of his six-plus seasons with the Red Sox, Moncada will follow the traditional earnings trajectory of a prospect who makes something close to the major league minimum for three years of service time, then enjoys raises through arbitration in the fourth through sixth seasons of his time in the big leagues, before arriving in the magical land of milk and honey known as free agency.

By way of comparison: The Sox spent about $21 million on big league salaries for Jacoby Ellsbury during his six-plus years of team control. If Moncada (who is a different player – different positions, different tools) remains healthy, produces, and follows a similar earnings pattern, the total cost of his pre-free-agent years would soar far past $80 million (based on inflation and the fact that Ellsbury’s earnings were dampened by injuries).

Is he worth it?

One evaluator of a team not involved in the Moncada bidding said that he expected the 19-year-old to sign for a $40 million bonus with a total cost (including penalties) of $80 million, so the investment isn’t necessarily viewed as outlandish by other teams given the talent. That same evaluator preferred Moncada to Castillo, to whom the Sox committed $72.5 million.

If Moncada ends up becoming an All-Star caliber talent, then he would represent something of a bargain who would permit the team considerable payroll flexibility to address other needs. The Sox’ investment, seemingly, is up front (the penalty hammer drops immediately; bonuses typically are given up front as well). None of it counts against the team’s payroll as calculated for luxury tax purposes. So, if Moncada is a very good everyday player or an All-Star in, say, four years (a couple years in the minors, perhaps, with a year or so of anticipated transition time to the big leagues), he could be offering the team $20 million-plus production at something near the major league minimum.

If he flops? Well, his signing would be a one-time expenditure that doesn’t come at the expense of this year’s big league payroll (which seems likely to exceed $200 million, as calculated for luxury tax purposes) and that might not be on the books going forward.

How does he fit with the Red Sox?

Here’s the tricky part. The Red Sox have a young shortstop of the future (Xander Bogaerts), and consensus suggests that Moncada’s defense isn’t going to play him off of that position. But Moncada’s fallback to second base also doesn’t represent an option as long as Dustin Pedroia remains anchored there for the duration of the decade (and then some).

He could move to third, but the Sox not only have Pablo Sandoval signed to a five-year, $95 million deal, but some of the team’s top prospects (particularly 18-year-old Rafael Devers, a potential future middle of the order bat, Garin Cecchini, as well as 2014 first-rounder Michael Chavis) at third. He has the athleticism to go to the outfield, though the team already has a crowd of prospects and long-term assets there, most notably Castillo, Mookie Betts, Manuel Margot, and Jackie Bradley Jr. (to say nothing of the current members of the big league roster).

So Moncada’s path to making an impact on the Red Sox roster is unclear – particularly in comparison with that he would have had with the deep-pocketed Yankees and Dodgers, which helps to explain why those two teams were considered favorites to sign him.

But, if the talent is what most evaluators – including the Red Sox – seem to think it is, then Moncada gives the team a pool of high-end talent from which to draw and create tremendous options and flexibility. He opens the door to all kinds of trades of standout prospects. At a time when teams are banging their heads in frustration about the scarcity of elite position players, there’s value to stockpiling.

It’s a strategy the Cubs have followed in accumulating several of the top young shortstops in the game, and a blueprint the Sox followed to a degree over the last seven months in accumulating outfielders via trade and free agency (Yoenis Cespedes, Allen Craig, Rusney Castillo, Hanley Ramirez). A team can always find a way to resolve a logjam. What it cannot always do is address a shortage or nab the kind of teenage talent who immediately vaults to the top of the organization’s prospect rankings.

Prospects represent uncertainties, but their allure is a potentially franchise-altering payoff. Moncada embodies the notion.